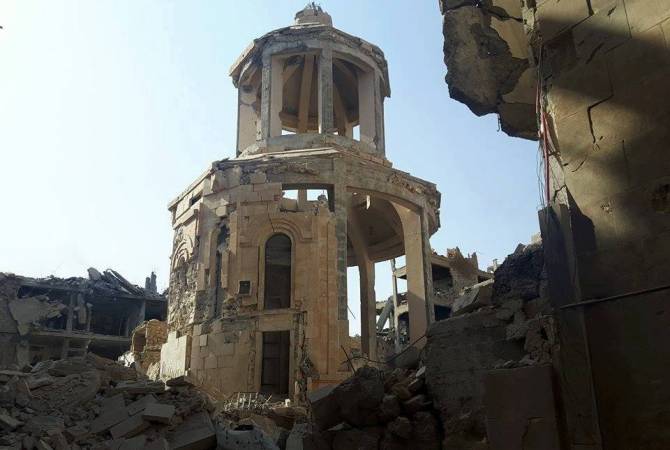 
YEREVAN, JANUARY 10, ARMENPRESS. The meeting of President of Syria Bashar al-Assad and the Syrian-Armenians, Armenian businessmen was held in quite a constructive and warm atmosphere. The group from Armenia was led by George Barseghyan, chairman of the Syrian-Armenian community in Armenia. He presented details from the aforementioned meeting during an interview to ARMENPRESS.

“There was a task that this Board must boost Syria-Armenia ties. The first step was asking for a meeting with Syrian President Bashar al-Assad. And this request was approved very soon. A meeting was scheduled not only with the Syrian President, but also other high-ranking officials of Syria. The Board has formed a delegation consisting of Syrian-Armenians, Armenian businessmen”, he said.

He noted that Assad’s government managed to overcome the current situation. The US thinks of withdrawing its troops from Syria and is already taking practical steps. A number of Arab countries are thinking of opening their embassies in Syria. All these actions suppose restoration of Syria, and for this purpose quite major economic programs are expected to be implemented.

“The Syrian government plans to give priority in these programs to those countries which stood together with it during those years. Armenia is among those countries which didn’t close its embassy during the war, always kept the state ties and sent an aid to Syria. And during the upcoming progress, business programs and restoration works the priority will be given to Armenians”, George Barseghyan said, adding that the Syrian government highly values the role of the Armenian community. He said it’s not a coincidence that the Syrian President promised to restore the Armenian Church in Deir ez-Zor with his own resources.

During the visit in Syria the Armenian delegation also met with the prime minister, the parliament speaker, as well as business companies. They have outlined a number of directions for future cooperation.

“Our visit pursued several goals. Firstly to strengthen and intensify the Armenia-Syria ties. In addition, we also wanted to express our support to the Syrian President and government. Armenia is one of those unique countries most of the population of which supports the current Syrian government, because we have managed to reach significant success during that leadership’s government. It was a proper occasion to show our support. Eventually, we have an Armenian community in Syria, in Aleppo, Damascus and etc. The local Armenians have very good relations with the authorities, and we also must think about this”, he said.

The meeting with Assad was also marked by handing over a symbolic gift. A mock of a monument in Armenia has been handed over to the Syrian leader which symbolizes Armenians’ gratitude to the Syrian people for the support shown during the Armenian Genocide. The monument is located on the way to the Zvartnots airport and has been constructed by the funds of Diaspora-Armenians. The monument depicts the map of Syria, the Armenian eagle, the pillar of eternity. Non-official inauguration ceremony of the monument was held in 2013.

Syrian President Bashar al-Assad hosted the Syrian-Armenian delegation led by George Barseghian in late December. The meeting participants discussed the situation in Syria and the country’s restoration process. The businessmen expressed wish to participate in the reconstruction activities. The Syrian President stated that Armenia’s principled position and support provided during the whole period of terror war unleashed against Syria enable it to be one of the leading countries which have a fair right to participate in Syria’s restoration works.