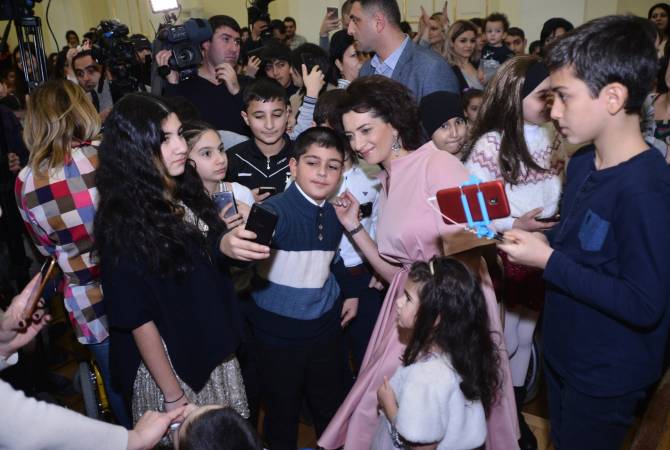 Children of volunteers fallen in the Artsakh war, grandchildren of missing persons in war, kids of soldiers killed during the 2016 April war, orphanage kids, Syrian-Armenians, as well as children from bordering villages participated in the New Year event.

“We have gathered from a village, a town, different places to celebrate this day together, say goodbye to 2018 and greet 2019. We are here to take care of each other, become friends, love each other and keep ties next year. We are not here just to spend time and leave, we are here to get acquainted with each other and be in touch during the whole year”, Anna Hakobyan said.

She welcomed the kids at the acting PM’s residence together with her two daughters.

She expressed confidence that in 2018 children have been smart, studied well and added one year to their path to becoming a good person. She urged the kids to make more efforts next year for this purpose.

Different games, exhibitions and shows have been organized for the children.

6-year-old Liana Topalyan said she was so impressed with the games that will ask her mother to again bring her here.

The Snowman and Snow White handed over gifts of Armenian production to the children.

Anna Hakobyan toured the hall, talked to all children. Most of the kids also communicated with acting PM’s daughter Shushan Pashinyan.