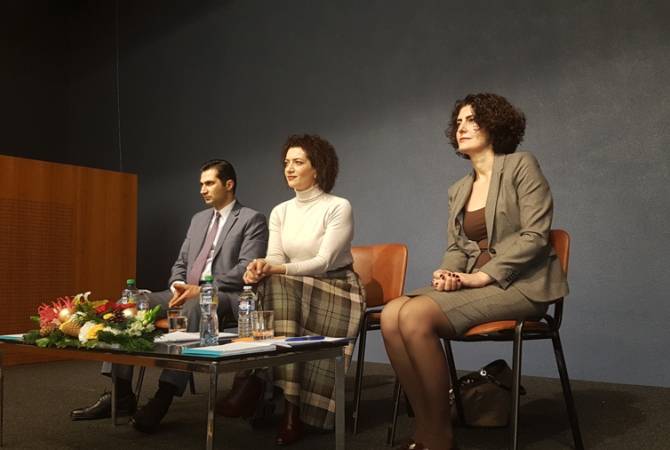 
YEREVAN, DECEMBER 13, ARMENPRESS. Armenian acting prime minister’s spouse Anna Hakobyan, chairwoman of the Board of Trustees of My Step and City of Smile Foundations, visited on December 12 the St. Jacob Church in Geneva, thereafter, met with the representatives of the Swiss-Armenian community, reports Armenpress.

At the meeting Anna Hakobyan touched upon the recent velvet revolution, the new situation in Armenia, as well as introduced the goals and activities of the My Step Foundation.

“I have no doubt that we will solve our issues in the same atmosphere of love and solidarity. Now I am a guest in a country which is one of the most prosperous states in the world, where there are almost no poor or unemployed people, where everything is shining, and all conditions exist for happy living. And on my way to this country, by looking at this wonderful place from the sky I wondered why Armenia cannot be such?” Anna Hakobyan said, expressing confidence that everyone believes in the prospect of having a developed and prosperous country after the velvet revolution, even the Diaspora-Armenians.

“And the belief is the most important thing, the rest, as it is called to say, is a technical issue, constant hard work everyone in his/her place, combination of efforts of Diaspora-Armenians, love towards each other, towards our wonderful country, and we will soon present a new surprise to the world, we will surprise it as we did by our perhaps the kindest revolution in the human history”, she said.

During the meeting Mrs. Hakobyan also answered to the questions of the participants. Asked whether the My Step Foundation has any program relating to journalism, Anna Hakobyan attached great importance to the role of qualified journalism, adding that at the moment the Foundation has no such program. “But I would like very much to create an opportunity for our journalists in the future to undergo training in famous foreign media outlets”, she said.

Asked how the Foundation differs from the remaining ones, for example, from the Hayastan All-Armenian Fund, CEO of My Step Foundation Hovhannes Ghazaryan said the Hayastan Fund is a state fund and deals with the renovation of infrastructures, but the My Step Foundation’s activities are directed for developing a healthy and inclusive society via long-term impact programs.

During the meeting a proposal was made to create platforms adjacent to the Armenian Embassies which will enable all people having ideas on Armenia and the Armenia-Diaspora relations to present their suggestions. Numerous concerns, proposals and wishes were voiced during the meeting which mainly related to the country’s economic, public, political, educational and cultural spheres.