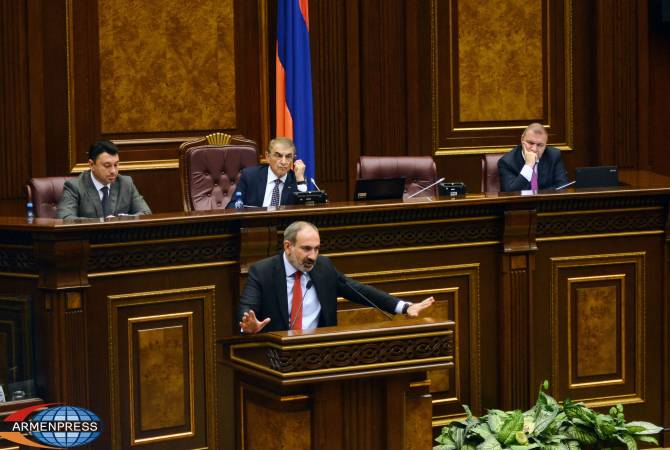 
YEREVAN, NOVEMBER 13, ARMENPRESS. Acting Prime Minister of Armenia Nikol Pashinyan assures that they have eliminated and eliminate several factors contributing to emigration. They have put a task to raise the country’s attractiveness as Armenia must become the best place for living, reports Armenpress.

During the parliamentary debate of the 2019 state budget draft, MP Ruzanna Arakelyan said there is a great emigration in some villages of Armenia, there are almost no youth there. “How we are going to promote the return of the youth if there is no concept for repatriation?”, the lawmaker asked.

In response Pashinyan said there was an idea to set some privileges for the people who return to Armenia. “But what we can do with the people who want to leave the country. Our task should be to raise the country’s attractiveness. For a long time we have been guided by the presumption that the social problem is not the only one reason that people emigrate. Here there is a matter of fairness, legality, opportunities and dignity. Today we guarantee that no one can illegally say something to another. We have calculated to what extent various pressure mechanisms, illegal actions of the law enforcement officers, the restrictions on economic activity, the privileges contribute to emigration in Armenia. We have eliminated and continue eliminating all these phenomena”, he said.

He stated that the concept for immigration is that Armenia must become the best place to live. The acting PM added that today they already promote the repatriation. “The prices in the real estate market are growing as many Diaspora-Armenians come and purchase real estate, as well as make investments. All these will be a good reason for immigration”, he said.

Pashinyan stated that since its foundation their party recorded in its program document that the number of Armenia’s population should double in the upcoming 20 years. “This political line has an ideological significance for us. But we don’t imagine this based on technical actions. We believe that it should be a result of content changes in the country”, he noted.