No enemies, insiders or outsiders in new times, Pashinyan says regarding appointment of police general as governor 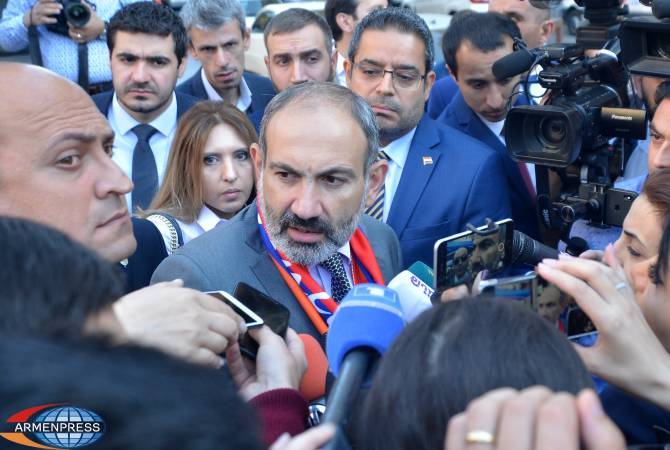 
YEREVAN, OCTOBER 17, ARMENPRESS. There won’t be any issue of enemies, outsiders or insiders in the new times, acting Prime Minister Nikol Pashinyan told reporters today. The acting PM was visiting the charitable Breath Of Syrian-Armenian Culture in Yerevan trade fair and was asked by reporters to comment on the appointment of Hunan Poghosyan as the new Governor of Syunik. Poghosyan is a police general who served as Armenia’s deputy police chief during the Serzh Sargsyan administration.

“We are entering a new phase. I’ve said numerously – there is a time to build barricades, and there is a time to dismantle barricades. We have now entered the phase of dismantling barricades. It’s not about the person of Hunan Poghosyan, it’s about a political message. The message is that we are not going to divide into enemies, [outsiders] and [insiders]. There are no flawless people in Armenia. I can’t recall any appointment which didn’t result in [comments]. In one case they were saying he is too young, in another case they said he is too tall, the third…..I say again, there are no flawless people, flawless appointments don’t happen. The issue is the following – we must make a clear message that we are planning to unite the entire potential,” Pashinyan said.

He noted that there is a lot of talk about the actions of officials. He said that everyone will be held to account for their actions. “Doesn’t matter if they are officials or not. The times when being an official meant privilege are long gone,” Pashinyan said.