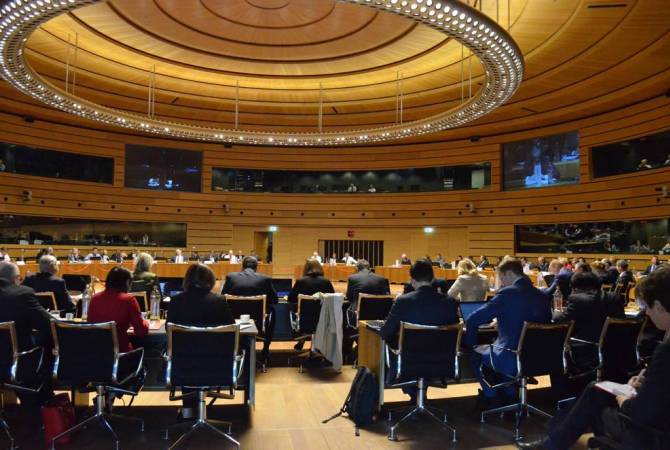 In his remarks the minister touched upon the cooperation prospects within the frames of Eastern Partnership, the recent domestic political developments in Armenia and the priorities of the government’s national development agenda. As for the Nagorno Karabakh conflict, the Armenian FM noted that the status and security of Artsakh are Armenia’s key priorities.

“I join you today for the first time in this format and also immediately after the Summit of the International Organization of La Francophonie, which gathered last week its 84 member, observer and associate states in Armenia, with about 40 delegations represented at the level of heads of state or government. The Yerevan Declaration of the Summit underlines the values of peace, solidarity, democracy and human rights, as well as shared adherence to the legitimate aspirations of our peoples, especially youth and women, to sustainable development, as well as to the protection of the environment. The objectives of La Francophonie and its motto «Vivre Ensemble» are very much familiar to our objectives in the Eastern Partnership.

2018 is very special for Armenia, a year of fundamental democratic transformation manifested by the peaceful Velvet Revolution, in which the Armenian public resolutely rejected the entrenched negative practices of the past and decisively embraced reforms aimed at fighting corruption, strengthening the justice system and the rule of law, the protection of human rights and fundamental freedoms, and securing equal opportunities in social and economic life to promote sustainable development. The Velvet Revolution has demonstrated the considerably high degree of political maturity and legal literacy of the Armenian public, of all its segments and institutions. Of particular significance is the distinctly strong role of the youth and women, who stood at the forefront of the Revolution. The Secretary General of the United Nations has recently specifically identified the role of the youth in Armenia in what he described as a fantastic example of peaceful transfer of power. The strong support of the Armenian public rendered to the Prime Minister of Armenia and to the Government is both inspiring and hugely obliging.

The peaceful democratic transformation opens up new avenues of cooperation within the framework of the Eastern Partnership. The targets identified by the "20 Deliverables for 2020", particularly in such areas as advancing the economic development and market opportunities, strengthening institutions and good governance, fostering connectivity, energy efficiency, mobility and people-to-people contacts, the protection of the environment are such areas, and they are also among the many priorities, main priorities of the new Government of Armenia.

In the previous five months the Government of Armenia has been specifically focused on the objectives of fostering the rule of law, fighting corruption and strengthening democratic institutions. In our actions and activities by far we have a good measure of tangible results, as well as strong recognition of the imperative of continuity and sustainability of such efforts. Equally important is the priority of fostering our national development agenda.

The results of the municipal elections in Yerevan in September manifest the continued strong public support and mandate rendered to the political base of the Prime Minister and our Government. The popular demand for conducting extraordinary elections defines the present political momentum. Elections are expected in December 2018. As was the case with the municipal elections, the conduct of genuinely free and fair general elections is the absolute priority and the strong political will of this Government. The Government welcomes and appreciates the technical and financial support of the European Union and its member states for the conduct of elections.

The Government is equally resolute in reinforcing its reform agenda for development. Modernizing Armenia’s economy with particular emphasis on advancing information and communication technologies, amplifying the growth of start-ups, supporting SMEs, fostering innovation and creative education define the nature and the direction of our development agenda. It aims at embracing the national talent as the drivers of smart development. Conducive environment for innovation, creative thinking, the use of technologies, investing in young people’s skills and entrepreneurship are amongst the strategic priorities of this Government, which embrace the bottom up dynamics and successful examples of business and impact investment initiatives, the spread of state-of-the-art creative education and technology centres across the country. We intend to stimulate the cooperation within different platforms afforded by the EU and the Eastern Partnership in this regard - Horizon 2020, Erasmus Plus and other such platforms. The EU-Armenia Comprehensive and Enhanced Partnership Agreement is a truly significant framework of multidimensional cooperation with the EU in support of our national development agenda.

We are willing to build on the existing positive record of cooperation and support for the advancement of smart public administration. To date, the EU support includes the introduction of an electronic document-management system in the Armenian government institutions, including e-system for submitting tax statements; an electronic civil status registry, a one-stop-shop vehicle registration system, an automated driver’s license issuing system, online “e-police”, e-visa system, and an online business registry.

Armenia’s Velvet Revolution has been strictly homegrown and is of an exclusively domestic nature. Both in its programme and in the actual conduct of policies the Government has been distinctly adhering to continuity of its foreign policy, both at bilateral and multilateral levels, aimed at the promotion of regional and international peace, stability and mutually reinforcing cooperation. Armenia’s foreign policy is strictly Armenia-centred.

On Nagorno Karabakh, I do agree with my colleague Elmar about the good dynamics in meetings. We had two opportunities to meet in these past five months. There was a good meeting between my Prime Minister and President of Azerbaijan, which rendered good dynamics, and we are keen to build on this. The elections in Armenia, of course, are going to happen soon, possibly in December. At the same time, an equally important priority concerns sustaining focus on establishing and promoting an environment conducive to peace, which includes many things – confidence building measures, including the implementation of previous agreements on this, risk reduction measures against escalation - we need to focus on that- and genuine efforts to prepare the populations for peace on all sides of the conflict. Much important priority is abandoning bellicose rhetoric and hate speech.

Status and security of Nagorno Karabakh are our top priorities. Nagorno Karabakh is a party with the decisive voice in the peace settlement and should have a more immediate engagement. And we are talking about this of course.

As we are approaching the 10th anniversary of the Eastern Partnership, we should pay attention to not repeating the mistakes of the past and preserving the Initiative to what it is: first and foremost a partnership of people for improving lives in our countries and bringing our societies closer together. In this context I would also emphasize the very important priority of visa liberalization, which we are pushing forward with EU countries”, he said in his remarks, according to the foreign ministry.