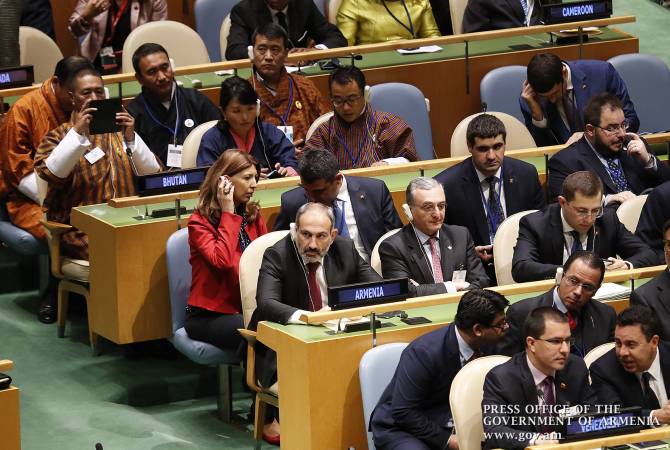 
YEREVAN, SEPTEMBER 25, ARMENPRESS. Prime Minister Nikol Pashinyan, who is in New York on a working visit, participated in the UN-hosted summit on September 24, referred to as Global Call for Action on the Global Narcotics Problem, Pashinyan’s office said.

It is a great honor to address Nelson Mandela Peace Summit that marks the centennial anniversary of this iconic political leader. Mandela’s image symbolizes peace and human dignity, embodying struggle and compassion at the same time.

His name is deeply rooted in our collective memory as a pioneer for the fight against racism and discrimination, strong advocate of justice and equality.

It was only half a year ago, when the people of Armenia rejected fear and injustice and went out to the streets to protest for their fundamental rights, freedom and dignity.

As the dramatic events were unfolding in the streets of Yerevan I was asked if I had a model of a leader who inspired me in my nation’s strive for democracy and social justice and my answer was YES, there is such a leader. And that leader is Nelson Mandela.

As Mandela said on one occasion “I learned that courage was not the absence of fear, but the triumph over it. The brave man is not he who does not feel afraid, but he who conquers that fear.”

Mandela’s walk, the long walk to freedom was with me during my imprisonment, and to a great extend influenced my conscience and motivated me to embark on my own “long walk to freedom” through prison and persecution, through struggle against injustice across the towns and villages of my country.

In the true spirit of Mandela’s ideas, our movement became known to the world as Armenian non-violent velvet revolution of love and solidarity and now, months after my people’s success, I stand here at the high rostrum of this summit as the head of modern Armenian government to celebrate the legacy of this great person whose courage and determination served as an example for others around the globe.

I come from a region, where unfortunately bloody conflicts, corrupt system of governance, animosity between people overshadow wisdom and the need for peaceful coexistence.

Democracies are not supposed to wage wars against each other. I hope that one day our region’s democratic development will rule out the risks of hostilities, wars and hatred. Armenia has firmly embarked on this path of and strongly stands for regional peace, stability and reconciliation.

This year we will mark the seventieth anniversaries of the adoption of the Universal Declaration of Human Rights and the UN Convention on the Prevention and Punishment of the Crime of Genocide.

This provides us with yet another opportunity to reflect on the reasons of why the humanity to this day is not immune from the scourge of discrimination, intolerance, xenophobia, persecution and crimes against humanity.

The life and struggle of Nelson Mandela will stand as a true role model of what should and can be done, as he was preaching that “no one is born hating another person…, and if they can learn to hate, they can be taught to love”.

In conclusion, Prime Minister Nikol Pashinyan and the members of the Armenian delegation went to view the 12th-13th century Armenian cross-stone at the UN headquarters.