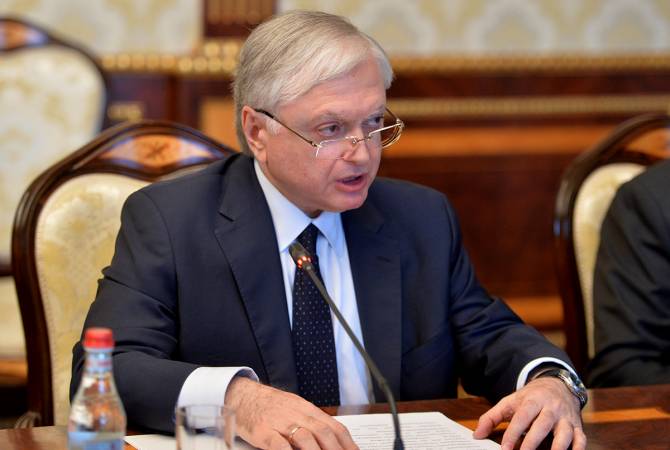 
YEREVAN, MARCH 1, ARMENPRESS. Foreign Minister of Armenia Edward Nalbandian gave a speech at the National Security Council. As ARMENPRESS was informed from the press service of the Armenian President’s Office, the Minister particularly said,

Since its independence Armenia has tried to establish relations with Turkey. However, the Armenian-Turkish relations were in the deadlock when the President of Armenia initiated the process of normalization of relations with Turkey back in 2008, which was based on the vision of normalisation of relations without preconditions.
It was with this common understanding of normalizing relations without preconditions, that we launched and conducted negotiations with the Turkish side, which resulted in the signing of “Protocol on the Establishment of Diplomatic Relations between the Republic of Armenia and the Republic of Turkey” and “Protocol on the Development of Bilateral Relations between the Republic of Armenia and the Republic of Turkey” in Zurich on October 10, 2009.
Throughout the whole process of negotiations we felt the unequivocal support of the international community, which attached great importance to the normalization of the Armenian-Turkish relations and considered the step of Armenia as a wise initiative. The presence of the Foreign Ministers of Russia, the United States, Switzerland, as well as the EU High Representative and the Chairman of the Committee of Ministers of the Council of Europe attest to that.

Armenia has always been consistent in its stance on the implementation of those protocols. Unfortunately, the further developments demonstrated once again that Ankara is not ready for the normalization and that the vocal statements of the Turkish side on the readiness to, so called, historical reconciliation have nothing to do with the reality. Even on the day of protocols’ signing the Turkish side again tried to voice the preconditions it had been using before the launch of the process. For this reason the signing ceremony was delayed for couple of hours. The high level representatives of the international community attending the ceremony, both at that time and later, stated that the protocols should be ratified within the reasonable timeframe and implemented without preconditions.


However, following the signing of the Zurich protocols, Turkey returned to the language of preconditions which not only had nothing to do with the letter and spirit of the protocols, but was contradicting to those. Turkey conditioned the ratification of the protocols to the settlement of the Nagorno-Karabakh conflict according to the maximialistic and groundless approaches of the Azerbaijani side and openly welcomed the provocative statements and actions of Azerbaijan against Armenia and Nagorno-Karabakh.

Not only Armenia, but the countries and international organizations that supported the process stated that the settlement of the Nagorno-Karabakh issue cannot be linked to the process of normalization of the Armenian-Turkish relations. Such attempts can harm both processes.

We have also continuously reaffirmed, both at the beginning and throughout the Armenian-Turkish normalization process that Armenia will never question the importance of international recognition of the Armenian Genocide.

As President Sargsyan has repeatedly emphasized, Armenia does not resort to the language of preconditions, but equally, we shall never accept preconditions put forth by anyone.

When the Turkish side lead the whole process to a stalemate, Armenia had to halt the ratification procedure, while still being ready to ratify the Protocols in parallel to the relevant steps by Turkey. This approach of Armenia has been positively perceived and welcomed by different countries and international structures.

Ankara’s rejection of President Sargsyan’s invitation on participation in the commemoration of the Centennial of the Armenian Genocide on April 24, 2015, which I conveyed to the President of Turkey Erdogan in August, 2014, once again proved that Turkey is not ready to move forward towards the normalization of the Armenian-Turkish relations. That was another missed opportunity for Turkey.

Armenia has repeatedly stated that Turkey can`t keep the protocols hostage forever. But Ankara did not heed to the calls consistently made both by us and the international community.

Indeed, we have never relied on Turkey`s favour, but tried to build equitable and modern relations. Perhaps this is the reason of Turkey`s reluctance to ratify the Protocols. After all, these were the first documents on the Armenian-Turkish relations that were not imposed on us, moreover, they were initiated by Armenia and negotiated on the basis on our proposals. Armenia remained on its heights and was able to advance process it initiated, unlike Turkey, which didn’t find the strength to break its stereotypes, thus violating the cornerstone principle of international relations: pacta sunt servanda - agreements should be respected.

By launching the normalization process of the Armenian-Turkish relations, we fully realized the possible further developments. Through the signing of protocols we sought to normalize relations, but we also realized that Turkey might not demonstrate relevant political will and respect its commitments.

Time proved that our concern was righteous. Up to this day, the absence of any step towards the ratification of the Protocols from the Turkish side, continuos attempts to link the ratification of the protocols with preconditions, provocative statements against Armenia and Armenians voiced by Ankara vividly attest that Turkey is not ready to ratify and implement the Protocols.