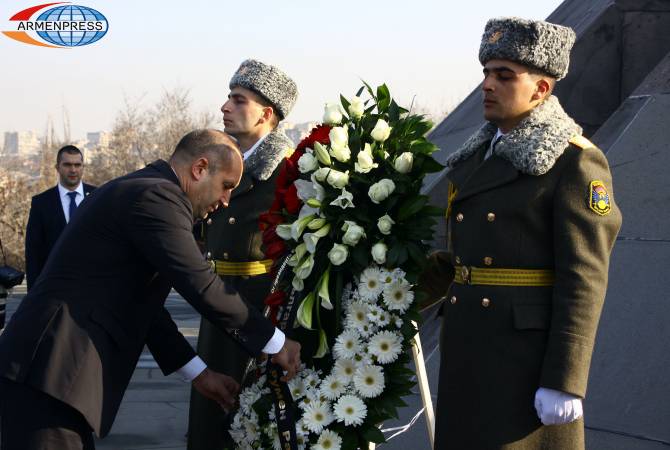 
YEREVAN, FEBRUARY 12, ARMENPRESS. While on a state visit in Armenia, President of Bulgaria Rumen Radev and his wife visited the Tsisternakaberd Memorial to pay tribute to the memory of the Armenian Genocide victims, reports Armenpress.

The President laid a wreath at the Memorial and flowers at the Eternal Flame.

President Rumen Radev and his wife also toured the Armenian Genocide Museum-Institute, got acquainted with the exhibits and left a note in the Honorary Guest Book.

“Visiting the Memorial for the first time I pray for the memory of all innocent Armenains who lost their lives as a result of the mass atrocities committed in the Ottoman Empire in 1915-1922. I am stunned by the tragedy and human suffering of Armenians who fell victims defending their national identity and heritage. I am deeply moved by the courage and perseverance of those Armenians and their families who struggled to survive but forced to seek refuge abroad. I am proud that in these times of hardships many Armenians found safe haven and second homeland in Bulgaria where their descendants nowadays live side-by-side with their Bulgarian co-citizens”, the Bulgarian President wrote in the Guest Book.

Thereafter, he planted a fir tree in the Memorial Park.