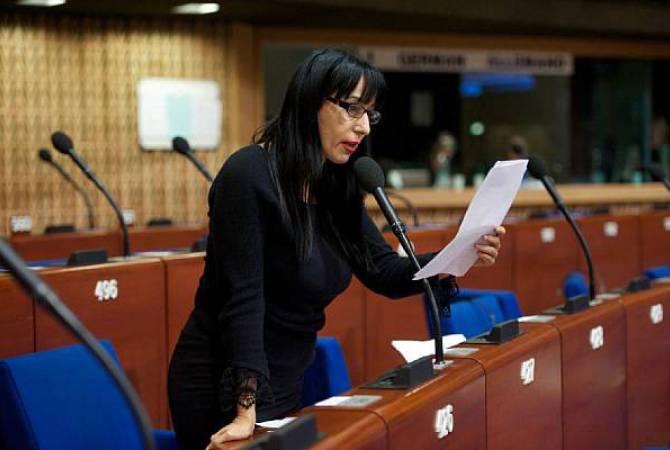 The Armenian MP also urged the representatives of Hungarian delegation at PACE to find out how Hungary sold murderer Ramil Safarov to Baku for 7.6 million USD.

Naira Zohrabyan delivered remarks at the PACE autumn plenary session touching upon the resignation of Pedro Agramunt and the recent corruption scandals involving European lawmakers and the need to disclose them.

“Pedro Agramunt, known as ‘Don Corruption’, resigned on October 6 by the calls of his political doctors. I congratulate those PACE lawmakers who didn’t allow the PACE name to be identified with corruption where someone can buy, sell, re-sell a lawmaker and force to serve his country’s authoritarian agenda. But whether putting an end on Pedro Agramunt is enough to clean up the corruption cobweb from the PACE face? It becomes clear that different European figures are involved in the famous corruption scandal who for years have received huge amount of money from the Danske Bank Estonia branch. I hope our colleagues of the Hungarian delegation will address a question to their country’s political leadership over the scandalous disclosure according to which Hungary has sold murderer Ramil Safarov for 7.6 million USD who killed Armenian officer Gurgen Margaryan with an axe while he was sleeping. I think our Hungarian colleagues will be interested in how millions of dollars have been transferred to a bank account opened by Metastar Invest in the Hungarian MKB bank and how these bank accounts are linked with Hungary’s political leadership. I would like to remind that the Metastar Invest is the company which regularly transferred money to former PACE Vice-President Luca Volontè who most probably at the moment tells to the Italian prosecution about his warm relationship with his totalitarian friend”, Naira Zohrabyan said.

The Armenian lawmaker said during the PACE June session they have supported the creation of independent investigative body which impartially investigates all corruption cases linked with the Assembly’s activity. “There are numerous similar facts which have recently been the subject of international media. I join the statement of the President of Transparency International who said ‘it’s just shocking to see how certain political figures are being sold in a respected structure like PACE and close their eyes on corruption and human rights violations’. Recently the Seimas of Lithuania has appealed to the country’s financial crimes investigative body urging to investigative the possible involvement of Lithuanian figures in the corruption scandals linked with the PACE. I hope many CoE countries will follow Lithuania’s example and I assure that many supporters of Don Pedro will have to ask for a political asylum from the country nourishing them”.