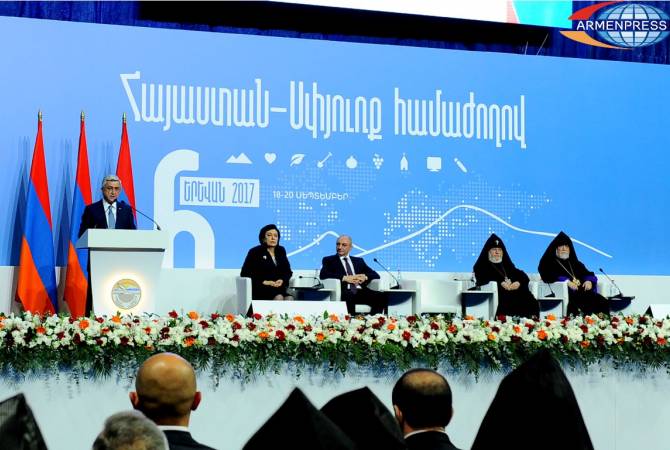 
YEREVAN, SEPTEMBER 18, ARMENPRESS.  Our steps over the coming years will seek to bolster the population’s natural growth in Armenia and achieve a significant change in the emigration and immigration ratio, President of Armenia Serzh Sargsyan said during the 6th Armenia-Diaspora conference.

“Summing up the achievements and shortcomings of the twenty-fifth years of independence, at the first session of the National Assembly of 6th convocation, we put on record our perceptions of the main priorities for the next 25 years. Improving the demographic situation in Armenia was a key focus over there. We are stating that the demographic trends are extremely worrying in our country: they are caused by several objective and subjective factors. Our steps over the coming years will seek to bolster the population’s natural growth in Armenia and achieve a significant change in the emigration and immigration ratio”, ARMENPRESS reports Sargsyan saying.

In the words of the President, it has been announced that the goal of the authorities is to ensure at least 4 million population in Armenia by 2040. “Obviously, we will hardly achieve that goal by merely increasing the birth rate, life expectancy or by improving the demographic pattern. Nevertheless, we will be steadfastly moving forward in the aforementioned areas. Therefore, this goal implies achieving serious indicators in immigration over the next 25 years”, he said, adding that this will be the main topic of the discussions of the coming Armenia-Diaspora conferences.

“The next Armenia-Diaspora Forum will come as a pan-Armenian discussion of the “4 million Armenia” program and the real start of its implementation. This is what we should agree upon here and right now”, President Sargsyan said.