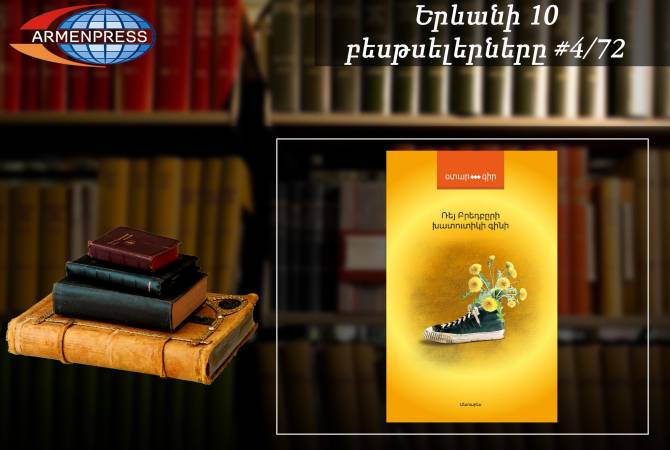 Mark Aren’s ‘Where Wild Roses Bloom’ is the 2nd in the list. The novel is about a Turkish former soldier, who suddenly hears a lullaby song – the only memory from his mother – and discovers that this song is actually in Armenian. The story tells about his subsequent inner feelings, struggles and attempts to find the graves of his parents.

Khaled Hosseini’s ‘The Kite Runner’ is ranked 3rd in the list. Published in 2003 by Riverhead Books, it tells the story of Amir, a young boy from the Wazir Akbar Khan district of Kabul, whose closest friend is Hassan. The story is set against a backdrop of tumultuous events, from the fall of Afghanistan's monarchy through the Soviet military intervention, the exodus of refugees to Pakistan and the United States, and the rise of the Taliban regime.

Stefan Zweig’s ‘Collected Stories’ comes next. Zweig was an Austrian novelist, playwright, journalist and biographer. At the height of his literary career, in the 1920s and 1930s, he was one of the most popular writers in the world. The book was translated by Ara Arakelyan and Margarit Arakelyan.

‘The Golden Calf’ by Ilya Ilf and Evgeny Petrov is ranked 5th in the bestselling list. Its main character, Ostap Bender, also appeared in a previous novel by the authors called The Twelve Chairs.

Oscar Wilde’s ‘The Picture Of Dorian Gray’, which was last week’s chartbuster, is ranked 6th.  Dorian Gray is the subject of a full-length portrait in oil by Basil Hallward, an artist who is impressed and infatuated by Dorian's beauty; he believes that Dorian's beauty is responsible for the new mode in his art as a painter. Through Basil, Dorian meets Lord Henry Wotton, and he soon is enthralled by the aristocrat's hedonistic worldview: that beauty and sensual fulfillment are the only things worth pursuing in life.

‘Fahrenheit 451’ by Ray Bradbury takes 7th position. ‘Fahrenheit 451’ is a dystopian novel published in 1953. It is regarded as one of his best works. The novel presents a future American society where books are outlawed and "firemen" burn any that are found. The title refers to the temperature that Bradbury understood to be the autoignition point of paper.

‘The Alchemist’ by Brazilian writer Paulo Coelho is 8th.Originally written in Portuguese, it became an international bestseller translated into some 70 languages as of 2016. An allegorical novel, The Alchemist follows a young Andalusian shepherd in his journey to Egypt, after having a recurring dream of finding treasure there.

‘Steppenwolf’ novel by German-Swiss author Hermann Hesse is the 9th in the list. Originally published in Germany in 1927, it was first translated into English in 1929. Combining autobiographical and psychoanalytic elements, the novel was named after the lonesome wolf of the steppes. The story in large part reflects a profound crisis in Hesse's spiritual world during the 1920s while memorably portraying the protagonist's split between his humanity and his wolf-like aggression and homelessness. Hesse would later assert that the book was largely misunderstood.

‘Dandelion Wine’, 1957 novel by Ray Bradbury concludes this week’s list. The novel is taking place in the summer of 1928 in the fictional town of Green Town, Illinois, based upon Bradbury's childhood home of Waukegan, Illinois. It was translated from English by Zaven Boyadjyan.