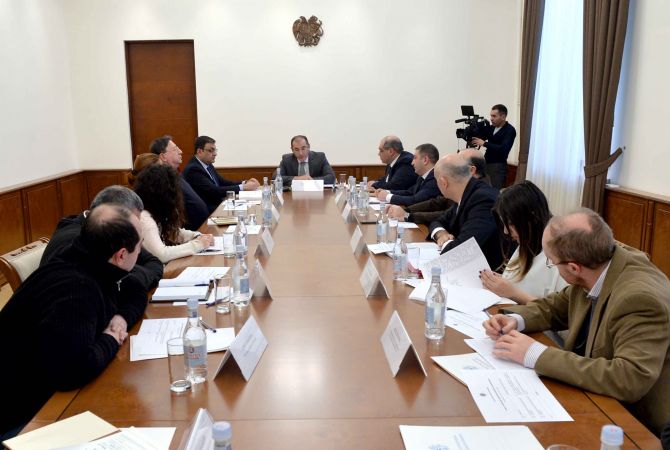 
YEREVAN, JANUARY 26, ARMENPRESS. The ministry of finance held a meeting with NGOs on January 25, briefing on the ministry’s anti-corruption actions as well as upcoming 2017 activities and undertakings which are aimed at discovering, preventing and countering corruption.

The summary of the “Association of Armenian Attorneys” NGO on solutions which was presented during the January 21 session of the anti-corruption council, chaired by the Prime Minister, was also presented.

Finance minister Vardan Aramyan said the ministry prepared a summary on the position and implementation status regarding the 36 problems which were raised in the NGO’s document. Therefore, 18 in the 36 recommendations are completed.

The remaining proposals are either in process, require additional discussions or are unacceptable, with 7 being out of the procurement sector.

According to the minister, the finance ministry strictly highlights the fight against corruption and takes practical actions, providing both transparency of the activities and the existence and implementation of institutions of conflicts of interests.

“Also by studying the international experience, we took bold actions in the procurement field, paying great attention to maintaining the 3 principles of the anti-corruption golden rule, which are: transparency of activities and providing openness, introduction of accountability and responsibility systems and public awareness.”

Sergey Shahnazaryan, head of the internal financial control and procurement methodology department presented the reforms in the public procurement field.

Afterwards, the level of transparency has been increased, under which the bids and announcements on absence of conflicting interests of the participants of the process will be published.

And, functional and institutional changes have been made in the system, which are aimed at specifying the procurement process, increasing the level of competition, expanding the e-procurement system.

The minister said similar meetings will be held again soon, where “specific” proposals will be discussed.

11:29, 05.19.2022
3131 views U.S. recognizes role of population of Nagorno-Karabakh in deciding its future–Ambassador Tracy’s interview to ARMENPRESS