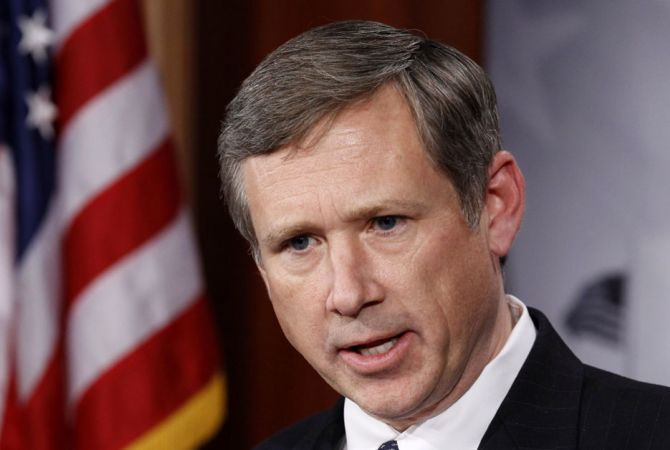 
YEREVAN, APRIL 28, ARMENPRESS. The time has come for Azerbaijan to face consequences from the United States and the international community for its blatant military aggression against the Nagorno-Karabakh Republic (NKR). “Armenpress” reports Mark Kirk representing Illinois in the U.S. Senate published an article in “The Hill” about NKR-Azerbaijan conflict. The article runs as follows:

After years of saber rattling, Azerbaijan’s four-day assault on the NKR earlier this month is its most egregious attack since it signed a cease-fire agreement with Armenia and the NKR in 1994. These recent military actions indicate the clear need for new measures to modify a cease-fire framework that is not working.

With no system to referee the cease-fire, Azerbaijan has become increasingly belligerent while facing no consequences for its violations. This must change.

I strongly support a congressional response, spearheaded by Chairman Ed Royce (R-Calif.) and ranking member Eliot Engel (D-N.Y.) of the House Foreign Affairs Committee, that offers three pro-peace measures to bring needed oversight to a cease-fire that has been precariously self-regulated by Armenian and Azerbaijani forces for more than two decades.

First, all sides should agree not to deploy snipers along the Nagorno-Karabakh line of contact.

Second, advanced gunfire locator systems and sound ranging equipment, monitored by the Organization for Security and Cooperation in Europe (OSCE), should be installed along the line of contact to verify the source of any attacks.

More than 80 members of the House of Representatives have signed the bipartisan Royce-Engel proposals, which have also been supported by the U.S. State Department and the co-chairmen of the OSCE Minsk Group.

In order for a lasting peace to be established, there must be goodwill and trust on both sides. But, while both Armenia and the NKR have affirmed their support for these peace-building measures, Azerbaijan has not. In truth, the lack of oversight on the current cease-fire framework provides useful cover for Azerbaijan’s belligerence.

U.S leadership is needed now to stop the bloody pattern in which Azerbaijan attacks the NKR, the NKR responds, and then Azerbaijan blames the Armenians for violating the cease-fire. We should no longer accept Baku’s flagrant duplicity.

I call upon the administration to raise the Royce-Engel proposals to the highest levels of the Azerbaijani government.

Azerbaijani President Ilham Aliyev has faced a chorus of international criticism for human rights abuses, such as the wrongful imprisonment of Radio Free Europe journalist Khadija Ismayilova and some 20 others who have been prosecuted on politically motivated charges, according to Human Rights Watch.

Just as the international community has come together to hold the Baku government responsible for its transgressions against civil society in Azerbaijan, so too should we call it to account for its treatment of the Armenians of Nagorno-Karabakh.

The OSCE’s Minsk Process, which started in 1995 to bring the parties of the conflict to a peaceful and comprehensive settlement, is hanging on by a thread. If diplomacy is to endure, there must be a verifiable cease-fire in place.

The onus is on Azerbaijan to demonstrate to the U.S. and the international community that it truly wants to be a partner in peace with Armenia and the NKR. Baku must fully commit to the Royce-Engel proposals.

The choice for President Aliyev is clear: Either he subscribes to diplomatic negotiations with the Armenians under peaceful circumstances or continues with a belligerent and futile policy of attrition.

If he chooses the latter, he should know that every act of Azerbaijani aggression will only further validate the Nagorno-Karabakh Republic’s argument that it go the way of Kosovo. As a veteran of the Kosovo War, I truly hope Azerbaijan realizes that the Nagorno-Karabakh conflict should only be resolved through peaceful means.