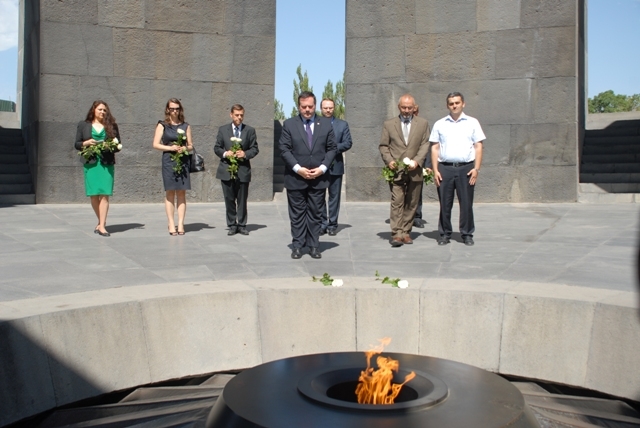 
YEREVAN, JULY 30, ARMENPRESS. The delegation headed by the Canadian Minister of Employment and Social Development and Minister for Multiculturalism, member of the House of Commons Jason Kenney visited Tsitsernakaberd Memorial Complex on July 30, 2014.

As reports “Armenpress”, Jason Kenney laid a wreath at the memorial of the Armenian Genocide victims. The Canadian delegation put flowers at the Eternal Fire and honored the memory of the innocent victims with a minute of silence.

The guests also visited the Memorial Wall and got acquainted with the temporary exhibition which represents the story of the Armenian Genocide.

The fact of the Armenian Genocide by the Ottoman government has been documented, recognized, and affirmed in the form of media and eyewitness reports, laws, resolutions, and statements by many states and international organizations. The complete catalogue of all documents categorizing the 1915 wholesale massacre of the Armenian population in Ottoman Empire as a premeditated and thoroughly executed act of genocide, is extensive. Uruguay was the first country to officially recognize the Armenian Genocide in 1965. The massacres of the Armenian people were officially condemned and recognized as genocide in accordance with the international law by France, Germany, Italy, Belgium, Netherlands, Switzerland, Sweden, Russia, Poland, Lithuania, Greece, Slovakia, Cyprus, Lebanon, Uruguay, Argentina, Venezuela, Chile, Canada, Vatican and Australia.