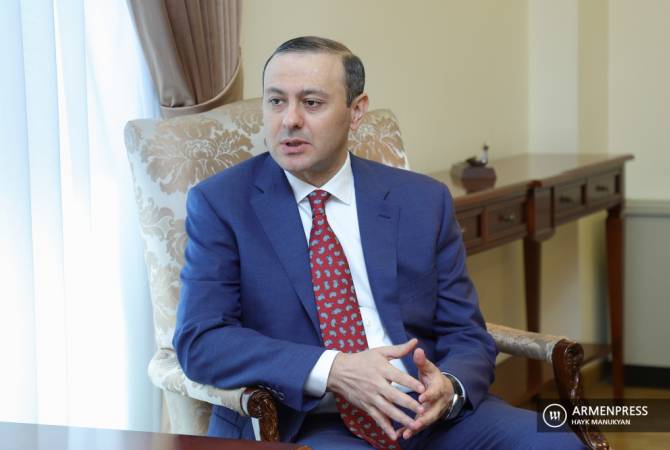 Speaking to reporters after the Cabinet meeting, Grigoryan reminded that Armenia submitted to Azerbaijan a 6-point proposal in response to Baku’s 5-point proposal.

“Azerbaijan’s proposed points were not unacceptable for Armenia. With its 6 points Armenia proposed that there should be a resolution also to the Nagorno Karabakh conflict in order for comprehensive peace to be possible. Now, our approach is that these two packages, 5+6 points must be joined with each other and start negotiations over a peace treaty in order to find a long-term solution to the Nagorno Karabakh conflict,” Grigoryan said.

He reiterated Armenia’s position on prioritizing a solution to the security, defense and rights of Armenians living in Artsakh and that the status of Nagorno Karabakh should be developed in accordance.

“I haven’t seen a public rejection of this package. There is an understanding in our discussions that these two packages should be joined and that negotiations should start. Both the Azerbaijani side and all other international partners have this understanding. Starting negotiations over the 5+6 points is a legitimate approach and we’ve seen that understanding,” Grigoryan said.