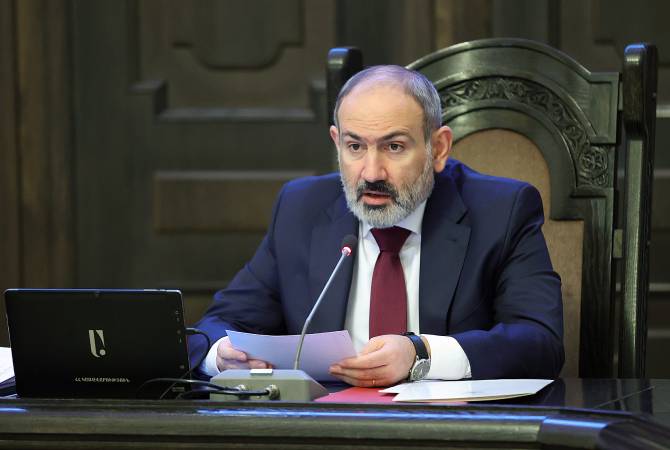 
YEREVAN, MARCH 24, ARMENPRESS. The citizens of the Republic of Artsakh are deprived of natural gas supply for already three days, Armenian Prime Minister Nikol Pashinyan said at the Cabinet meeting. He said that the supply was cut off as a result of Azerbaijan’s intervention.

“As you know, on March 7 the pipeline supplying gas to Artsakh was blown up in Azerbaijani-controlled territory. Using the most various pretexts, Azerbaijan was not allowing repair works and eventually Azerbaijan itself repaired it. As a result, the information we have indicates that Azerbaijan installed a valve on the pipeline.

On March 18, 11 days later, after restoring the gas supply to Artsakh for 4 days Azerbaijan simply closed the valve without any explosions on March 21, thus proving that it was behind the March 7 explosion,” the PM said.

PM Pashinyan highlighted the fact that both cases of the supply cut-off happened in unique circumstances.

“On March 7, unprecedented amount of snowfalls in the last 30 years happened in Artsakh and unprecedented drop in air temperatures were recorded. New record snowfalls and freezing cold was recorded on March 21 and in some places the snowfalls reached one and a half meters, one meter in capital Stepanakert, and the temperature reached minus eight degrees. And in these conditions Artsakh was intentionally deprived by Azerbaijan from the vitally significant natural gas supplies for heating apartments, kindergartens, schools and hospitals,” PM Pashinyan said.

He emphasized that this is enough to understand that as a result of Azerbaijan’s actions Artsakh is on the verge of a humanitarian disaster.

Pashinyan said he has no doubts that the heroic people of Artsakh will overcome this trial as well.

“But with this realization I must also say for the record that with its actions Azerbaijan is also rendering a service to the people of Artsakh, because this episode concerning the gas pipeline is a very precise and brief description of the Artsakh conflict for the international community. With this episode, the international community can understand the essence of the Karabakh conflict without reading hundreds of pages and studying the nuances of history.

This unequivocally showcases Azerbaijan’s policy towards the Armenians of Artsakh: That is – to make their life in their own homeland impossible. For one and a half years now, Azerbaijan is boasting of its so-called glorious victory in the 2020 44-day war, but everything shows that the fact that after so much suffering and deprivations, today, right now over 117,000 Armenians live in Artsakh, Azerbaijan considers this fact its biggest defeat and has set an objective to complete its policy of ethnic cleansing in Artsakh,” PM Pashinyan said.

In this context, Pashinyan said the Azerbaijani foreign ministry’s latest statement is very symbolic and speaks volumes, because Baku said in this statement that the Artsakh gas supply issue is its internal affair.

“If we interpret this from diplomatic language, this means that they are saying – ‘international community, don’t look this way and let us complete our policy of getting rid of Armenians by genocidal policy and ethnic cleansing in Artsakh under the pretext of so-called anti-terror actions or simply without obstructions, quietly’. No such thing can happen, and the diplomatic service of Armenia, other government officials, political forces, media, NGOs and individuals should in detail and widely present to the international community through social media everything that happened in Artsakh in the past 15 days,” Pashinyan said.

On March 8, the authorities of Artsakh said that the main pipeline supplying gas from Armenia to Artsakh was damaged on March 7 and the supply was stopped.

The Artsakh authorities had said the area where the damage occurred was in Azerbaijani-controlled territory. It was reported that the Azerbaijani military deliberately damaged the pipeline.

Meanwhile, the population of Artsakh is without gas and heating amid freezing temperatures and snowfalls. The Artsakh foreign ministry described Azerbaijan’s actions as humanitarian terrorism.

The Armenian Foreign Ministry said the current situation emphasizes the urgency of clear response of the international community towards preventing the humanitarian crisis.

On March 23, the FM of Armenia Ararat Mirzoyan said they utilized all diplomatic efforts to resolve the situation.

On March 23, the European Union expressed its concerns.