Vahagn Khachaturyan sworn in as 5th President of Armenia 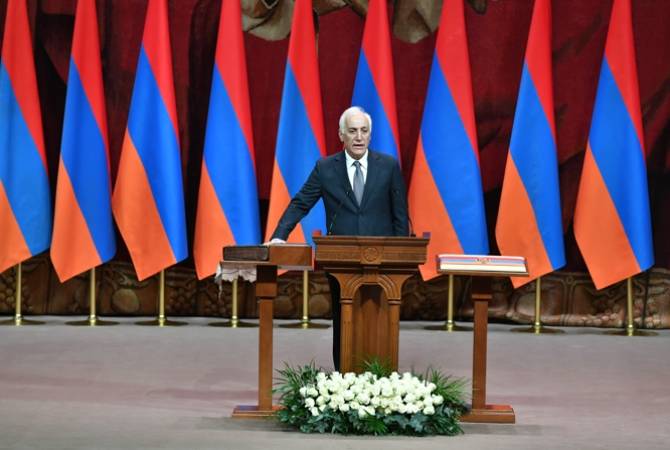 
YEREVAN, MARCH 13, ARMENPRESS. Vahagn Khachaturyan took the Oath of Office of President of Armenia at a special session of the Parliament on March 13.

The special session is taking place at the Karen Demirchyan Sports and Concert Complex, chaired by Acting Speaker of Parliament Hakob Arshakyan.

Vahagn Khachaturyan was sworn into office by placing his right hand on the original book of the Constitution of Armenia and the Bible.

“By assuming office of President of Armenia, I swear to be committed to the Constitution of Armenia, to be impartial during fulfillment of my powers, to be guided solely by state and pan-national interests and to contribute my entire strength for the strengthening of national unity”, he said.

The swearing-in was followed by the national anthem of Armenia, and remarks and blessings from Catholicos of All Armenians Garegin II.

19:52, 06.24.2022
2371 views The Chinese Ambassador to Armenia attaches importance to cooperation with Shirak Province in various fields