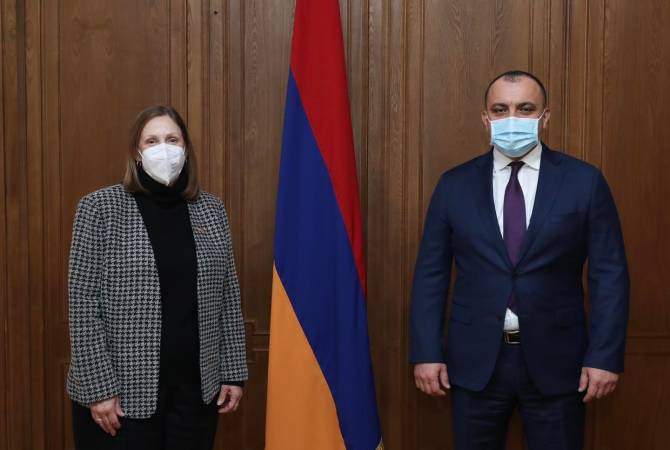 
YEREVAN, 27 JANUARY, ARMENPRESS. The US administration is committed to continuing to work closely with the Republic of Armenia in the areas of justice, the rule of law, and the strengthening of democratic institutions, ARMENPRESS reports Ambassador of the USA to Armenia Lynne Tracy said during the meeting with President of the Constitutional Court of Armenia Arman Dilanyan.

Welcoming the American colleagues, Arman Dilanyan highly valued the US-American cooperation, the continuous work on the implementation of the bilateral agenda in the judicial sphere. Arman Dilanyan noted that the Constitutional Court of the Republic of Armenia has an ambitious agenda of internal reforms, is determined to implement it, and the assistance of international partners, including the United States, will further promote their successful implementation.

Ambassador Tracey thanked for the opportunity of the meeting, noting that the US administration is committed to continuing close cooperation with the Republic of Armenia in the areas of justice, the rule of law, and the strengthening of democratic institutions. In this context, Ambassador Tracey highlighted the internal reform process launched in the Constitutional Court.

During the meeting, the interlocutors exchanged views on the prospects of implementing joint programs.