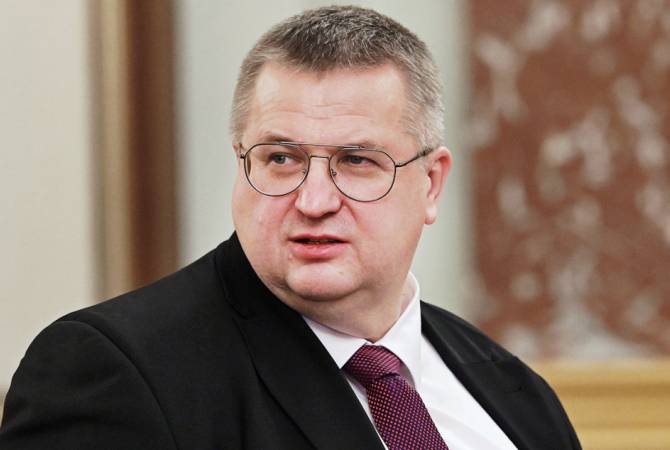 
YEREVAN, JUNE 11, ARMENPRESS. Substantive talk over the unblocking of the region is underway within the Russia-Armenia-Azerbaijan deputy prime ministerial working group. The key to solving this issue is the unblocking of Armenia which, in fact, is a blockaded country since it has gained its independence, Russian Deputy Prime Minister Alexei Overchuk said in an interview to the Rossiyskaya Gazeta newspaper.

“In case of presence of a good will, the transportation communication will open in the South Caucasus, the trade will start to develop, the economies of the two countries will get a new impulse for development and the people’s life will improve. It’s important that such good will exists”, Overchuk said.

According to him, from the very beginning the sides have agreed that they are choosing an approach based on common sense which allowed to start discussing all possible railway and automobile routes between the two countries.

He said Armenia has very limited transportation communication opportunities with the outside world, which obstructs the economic development and negatively affects the migration processes and doesn’t allow Armenia to fully reveal its potential.

“The transportation unblocking in the region is important for Russia, the Eurasian Economic Union and all neighboring countries. At the same time, Armenia will not only turn into a major international transportation hub connecting the Iranian ports of the Persian Gulf with the Black Sea ports, as well as Russian ports in the Baltic and the Pacific, but also it will be able to launch its own production because there will be a chance to enter into new markets, and the factors limiting the exports from the country will be left in the past. Such opportunities have never opened in the modern history, and undoubtedly, Armenia and Azerbaijan will be the main beneficiaries in this process. Russia helps them and other countries of the region in this process”, he said.

He presented the results of the activity of the trilateral working group and stated that when the solutions are found, and Armenia and Azerbaijan decide that they are ready to implement them, then it will be possible to continue the restoration of roads and the resumption of transportation ties.

“The important is to see a good future, and it’s also important that none of them takes such actions now which will further complicate this process”, Alexei Overchuk said.