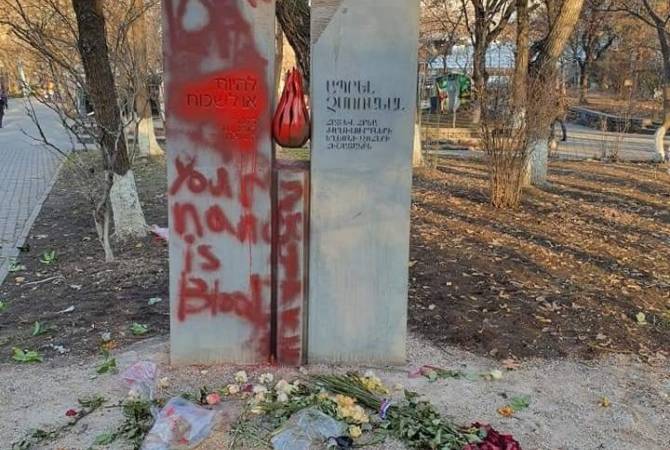 
YEREVAN, FEBRUARY 12, ARMENPRESS. Yerevan police are preparing casefiles over the act of vandalism that targeted the Holocaust memorial in downtown of the city. The memorial is officially known as the "To Live and Not Forget" memorial honoring both the Holocaust and the Armenian Genocide victims. It is located in a park near Moskovyan-Teryan intersection.

In turn, City Hall said their specialists are working to restore the statue and clean the paint.

Yerevan Mayor Hayk Marutyan’s spokesperson Hakob Karapetyan strongly condemned the desecration, noting that such incidents must be ruled out in Yerevan “where representatives of various nations are living side by side as Yerevantsis.”

“The desecration of any memorial is extremely unacceptable, moreover the kind of memorials which are related to the minorities living in the city. I think this problem should be solved through cooperation with the law enforcement agencies,” Karapetyan said when asked about actions for ruling out similar incidents in the future, given the fact that this is already the second time this particular memorial is targeted by vandals in the last few months.

The memorial consists of two primary pillars, with “To Live and Not Forget: To the Memory of the Victims of the Genocides of the Armenian and Jewish Peoples” written in Armenian on the right pillar and Hebrew on the left pillar.