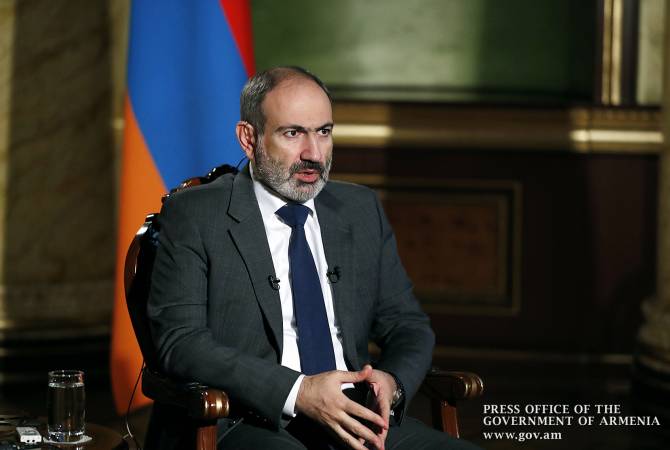 
YEREVAN, NOVEMBER 13, ARMENPRESS. Prime Minister of Armenia Nikol Pashinyan emphasizes that the declaration on ending the war in Nagorno Karabakh is not a political document of the settlement of the conflict. According to the PM, there are formulations and sentences in that document that must be interpreted and get political content, ARMENPRESS reports the PM said in an interview with Public TV.

''In fact, discussions must still start and it will be diplomatic discussion. And I think those discussions will last for a long period. I want to pay the attention of everyone on the fact that this is a document on stopping the military operations. The discussions will be possible and they will take place’', Pashinyan said.

Referring to the question that the opposition says there is still time to cancel the declaration, but the PM does not listen to them, Pashinyan answered, ''Personally I never heard how it can be cancelled. I can say something else, we can take that paper, tear it and throw away. But we should also understand the consequences of such an act. It means we will return to the situation when that paper was signed. And what does it mean? It means that we say that let our 30 thousands soldiers be blockaded’’.

The PM said that the circumstances when that document was signed should be considered. ‘’As I have already said, I made that decision based on the analysis of the military situation on the ground. I told in my yesterday’s speech that the key factor that resulted in my signing of the document is that in fact, Stepanakert city had no defense following the fall of Shushi. And if we could not stop the war very quickly, within hours, Stepanakert would have fallen, Askeran and Martakert would fall automatically. This means that 20-30 thousands of our soldiers, depending on the scenario, would find themselves in a blockade. It’s also very important that those soldiers that would have appeared in a blockade would be unable to have any impact on the situation. Why? Because they were standing on the front line, but the blockade that could have happened would be from the rear. And this was no the case when an all-around-defense could be possible, since the front line would collapse and we would have such a situation’’, PM Pashinyan said.

PM Pashinyan added that at that time military operations were going on, and those were extremely critical operations. ‘’I again want to say that now it’s often discussed the issue what we surrendered with that signature. But the reality is that this document is not or at least is not only about what we surrendered, but what we managed to preserve’’, Pashinyan said, adding that the lives of nearly 30 thousands soldiers were under risk when the document was signed.

11:29, 05.19.2022
3067 views U.S. recognizes role of population of Nagorno-Karabakh in deciding its future–Ambassador Tracy’s interview to ARMENPRESS