‘Culture has no borders’: Belgian-Armenian cellist plays at Upper Mosque in Shushi, Artsakh 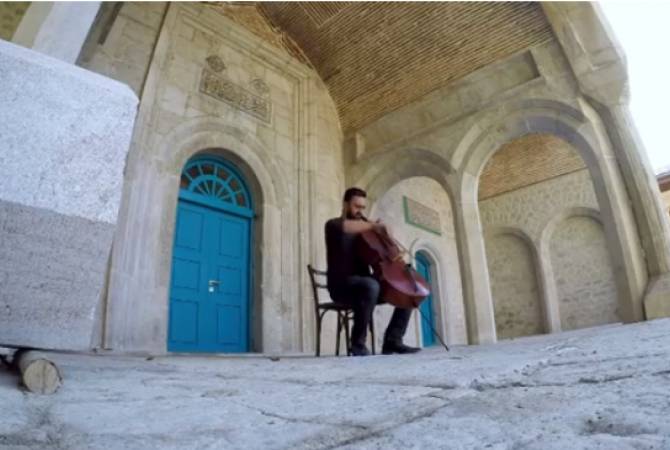 
YEREVAN, OCTOBER 23, ARMENPRESS. First cellist of the Belgian National Philharmonic Orchestra Sevak Avanesyan, who has recently performed 'Krunk' (Crane) by Komitas at the bombarded St. Ghazanchetsots Cathedral in Shushi town of Artsakh, made another performance, this time in the Upper Mosque in Shushi.

The St. Ghazanchetsots Cathedral has been bombed and partially ruined by Azerbaijani armed forces on October 8.

“I am really happy to be at this Persian mosque which was just renovated. It shows how Armenians value art no matter the religion. We are fighting against Islamist terrorists right now, but we are keeping the mosque in the most beautiful shape as we can”, the Belgian-Armenian cellist said.

Born in 1989 in Armenia, into a musical family, Sevak started studying cello at age of 5, with the well-known Armenian cellist Medea Abrahamyan, student of legendary Mstislav Rostropovitsch. He went on to study at the Tchaikovsky Specialized Secondary and Musical School in Yerevan until 2003. That year, his entire family moved to Brussels (Belgium) where he joined the class of Ms. Viviane Spanoghe at the Royal Conservatory. He graduated with the highest distinction in 2010 and was then accepted in the class of the renowned cellist Claudio Bohorquez at the “Hochschule für Musik Hanns Eisler" in Berlin.