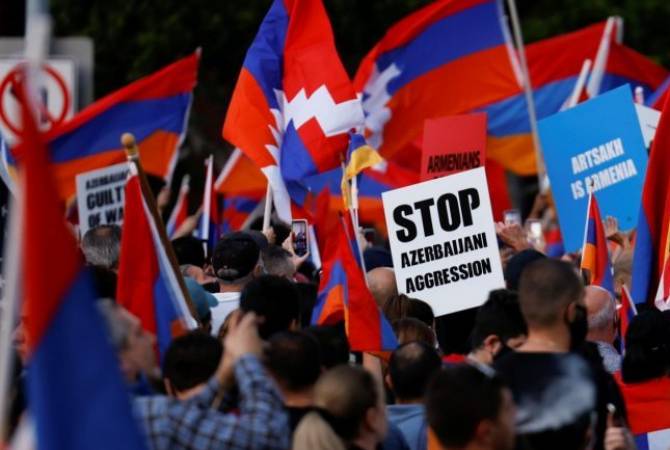 
YEREVAN, OCTOBER 7, ARMENPRESS. Thousands of people, including Armenians and foreigners, have gathered outside the European Parliament in Brussels on October 7, calling the EU to voice about the military actions unleashed by Azerbaijan and Turkey against Artsakh (Nagorno Karabakh) and to take immediate actions to prevent the bloodshed.

The protesters shout “Erdogan is a terrorist, Azerbaijan is an aggressor”. They are holding posters “Recognize Artsakh”, “Stop Erdogan”, “Stop Aliyev”, “Artsakh is Armenia”.

The protest took place while the European Parliament was discussing the aggression of Azerbaijan and Turkey against Artsakh.

“On behalf of the whole Armenian people we are accusing the European structures of staying silent to the Azerbaijani aggression. Turkey is involved in this conflict for achieving its geographical goals, and Europe remains blind and dumb. Armenians warn that the real goal of this war is genocide, but Europe remains deaf”, the protest participants said, reminding that Azerbaijan continues bombarding Artsakh’s peaceful civilians.

“Like this war, the July events as well took place during the pandemic, and we are accusing them. We are expecting very concrete actions from the European Parliament as it still is not acting in a way it can”, they said.