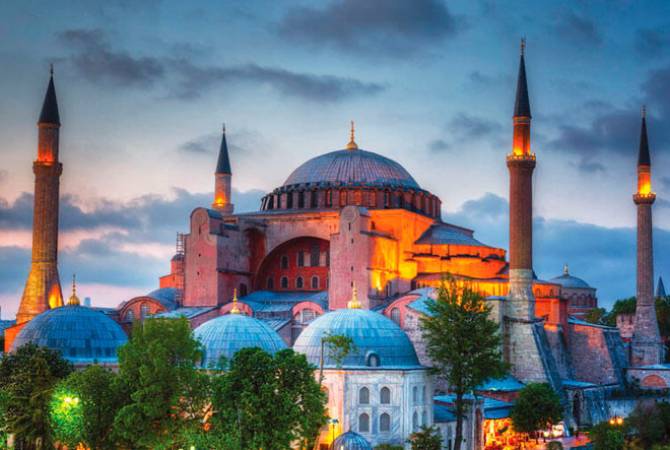 
YEREVAN, JULY 14, ARMENPRESS. His Holiness Garegin II, Supreme Patriarch and Catholicos of All Armenians, commented on the decision of the Turkish authorities on converting Hagia Sophia into a mosque.

“In the Mother See of Holy Etchmiadzin we regret over the recent decision by Turkish President Recep Tayyip Erdogan on converting the Hagia Sophia, an important cathedral for the Orthodox Churches and the Christian world, from museum into a mosque. Contrary to the calls of various pro-Christian organizations, clergymen and political leaders, the Turkish government adopted a unilateral and condemnable decision, thus violating the rights of the national minorities in Turkey. We regret that the calls and concerns of millions of Christians were ignored, even the fact that the Hagia Sophia is included in UNESCO’s World Heritage List, has not been taken into account.

The action of the Turkish government evokes heavy memories on the desecration and destruction of holy sites of the Armenian people and other Christian nations by the Ottoman government for centuries. The Armenian Apostolic Church and the Armenian people, as a survivor of the Genocide in the Ottoman Turkey, shares the grief and concern of the Orthodox brothers and sisters. The Armenian Church condemns the decision of the Turkish government, which was made based on the political interests and greatly damages the process of mutual understanding and dialogue of religions, at the same time urging to revise it and return to the principle of peaceful co-existence of various religious communities in Turkey”, His Holiness Garegin II said.

Turkey’s top administrative court on July 10 annulled the 1934 government decree that turned Hagia Sophia into a museum, paving the way for Hagia Sophia to be reconverted into a mosque. Erdogan signed the respective decree.

11:29, 05.19.2022
2886 views U.S. recognizes role of population of Nagorno-Karabakh in deciding its future–Ambassador Tracy’s interview to ARMENPRESS