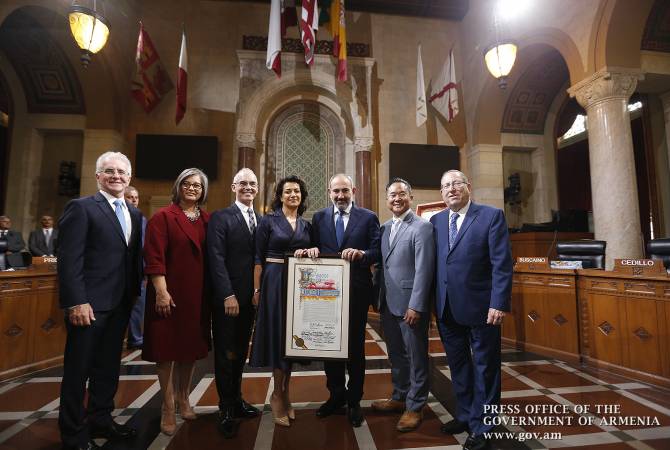 The PM started his visit from Los Angeles.

The Armenian PM’s first meeting was held with Lieutenant Governor of California Eleni Kounalakis. Mrs. Kounalakis welcomed Pashinyan’s visit to the United States and highlighted the launch of his visit from California, stating that it will contribute to the development of Armenia-California partnership. The Lieutenant Governor of California also congratulated Pashinyan on the victory of the peaceful, velvet revolution and guiding Armenia on the democracy path. She said the velvet revolution is the vivid evidence and example of democracy in the conditions of current challenges of democracy in the world.

In his turn the Armenian PM thanked for the warm welcome and appreciation, stating that he is happy to be in California where one of the biggest communities of the Armenian Diaspora lives and creates. “We want to strengthen our democracy economically, and the cooperation with our democratic partners, the United States will contribute to the fulfillment of our goals”, Nikol Pashinyan said. According to him, California is among the US states having more innovative economy, captures global leading positions in terms of technological achievements, and Armenia, as a county that set the technology sector as a priority attaches great importance to the deepening of cooperation with California. Pashinyan also highlighted the upcoming meeting with the Governor of California in New York, and the signing of an agreement, as well as the remaining documents during the visit to the US are a good base to deepen the Armenian-American collaboration.

The sides also exchanged views on the Armenian PM’s expected visit to the Silicon Valley, the development of democracy, Armenia’s economic progress, and the cooperation prospects in technologies, tourism, education and other spheres. The Lieutenant Governor of California said she recently visited Armenia, the TUMO Center for Creative Technologies, the American University of Armenia and is impressed with the results of the visit. Pashinyan said TUMO is an Armenian brand which will spread across the world, recently a similar center opened in Paris and is also expected to be opened in Moscow, Berlin and other cities.

The Armenian PM also expressed gratitude to the California authorities for the efforts aimed at raising public awareness on the recognition and condemnation of the Armenian Genocide.

Thereafter, PM Pashinyan met with Supervisor of Los Angeles Country’s 5th District Kathryn Barger, Country’s Senate member Anthony Portantino and the Los Angeles city council members. Kathryn Barger and Anthony Portantino welcomed the Armenian PM’s visit to California and Los Angeles, stating that it’s a good opportunity to discuss the prospects to deepen the cooperation. They stated that the Armenian community of LA plays a great role in the county’s public, political, culture life, and that the city authorities are interested in intensifying the partnership with Armenia.

During the meeting with the members of the Los Angeles city council Pashinyan said Armenia took the path to democracy and reforms after the velvet revolution, and in this sense the US support to these reforms is very important.

The PM also toured the Los Angeles city hall, got acquainted with the building’s architecture and history.