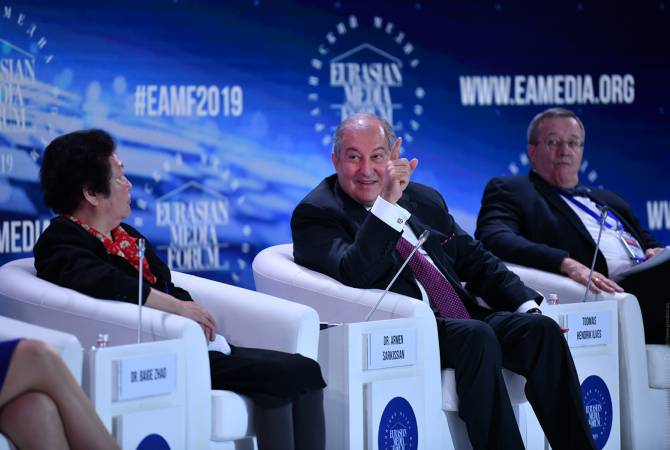 
YEREVAN, MAY 23, ARMENPRESS. Armenian President Armen Sarkissian participated in the discussion titled “Deglobalization: The world in search of new development models” on the sidelines of the 16th Eurasian Media Forum in Almaty, Kazakhstan, the Presidential Office told Armenpress.

In his remarks the Armenian President touched upon the idea of deglobalization, noting that he doesn’t believe in this term. “Globalization has not ended, it will continue and will be faster. It hasn’t started today, years or decades before, it started hundreds, thousands of years ago from the Silk Road and before that. The world was already globalized that time and the globalization’s options were different. Today globalization continues”, he said. The President agreed with the discussion participants that there are difficulties in the globalization process at different levels, and today’s most important issue relates to managing this process.

“Armenia is a small state, but a global nation, and I think that we will be the nation who knows how to get adapted. A nation, who has passed through major tragedies within the course of history and began the life from the new point. This is an important quality in the new world where there are less certainties and more uncertainties”, the Armenian President noted.

He added that Armenia has been and remains in the crossroad. “Armenia is a crossroad. That’s why our country has learnt to work with all and has close relations with Russia and other member states of the Eurasian Economic Union. But, at the same time, Armenia has signed an agreement with the European Union, and I do not see any contradiction here. Moreover, Armenia has an advantage, and the international community should try to use this advantage because Armenia is the only country that has deep relations both with the EU, Russia and Eurasia. So why not to use the opportunities of Armenia which serves as a bridge?”, he said.

The President answered numerous questions of the discussion participants. Asked whether the social media can replace the traditional media, he noted: “I don’t think so. Eventually, they will be merged. None of them will replace the other, but both will become a one unity”.

Mr. Sarkissian said today in the globalized world social networks unite the people. He talked about the quantum nature of the world policy, stating that the current political leaders are able to correctly use the new tools, the social networks.

In response to the question regarding the relations between Armenia and Azerbaijan, President Armen Sarkissian said currently the two countries are holding talks over the peaceful settlement of the Nagorno Krabakh conflict. He reminded that from the Armenian side the negotiations are run by Prime Minister Nikol Pashinyan and the foreign minister. “I express my full support to the peaceful settlement of the conflict. But this issue doesn’t remove Armenia from the opportunity to serve as a cooperation platform for international relations, between Eurasia and EU”, Armen Sarkissian said.