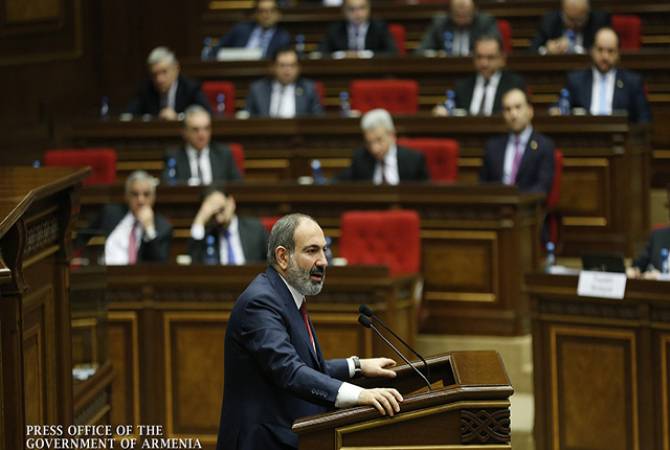 
YEREVAN, FEBRUARY 14, ARMENPRESS. The people are able to carry out an economic revolution and the Government is ready to guide the people to that point, PM Pashinyan said in his final speech of the parliamentary discussion of the Government’s Action Plan.

Speaking about the newly elected parliament, Nikol Pashinyan noted that it’s a parliament of a new qualitative level, which can be proved by the debates that lasted 3 days.

“What do we say in this stage, the stage of economic revolution? We say a very simple thing, that is the Government has its share of responsibility and works, but each citizen also has his share of responsibility and works to be done”, Pashinyan said, emphasizing that it’s impossible to overcome poverty without working and it’s impossible to change or create anything without work.

Speaking about the criticism by the parliamentary opposition about the preservation of national values, national schools and church, PM Pashinyan emphasized that it’s necessary to first clarify the word “national”. He told the story of Armenian king Pap, who is nowadays assessed as the enemy of the Armenian Apostolic Church. “But today we have the Apostolic Church of Armenia thank to Pap King, who said that we have our own state and there is no necessity for the Armenian Catholics to go an be anointed in Caesarea. We are a state, we have a king, capital city, religious class and the Catholicos should be anointed in our motherland”, Pashinyan said, adding that the Church opposed the king and he was eventually killed. Pashinyan emphasized that he is a follower of the Armenian Apostolic Church and a deep believer. He drew some parallels between nowadays and the times of King Pap. “Pap King said dear people, you have to pay taxes, he said that the men and women of our country are serving in monasteries and nunneries. But who will work to develop the economy of our country? Who will be the soldier of our country? They said “You are a traitor, anti-national”. We say the same. We say dear people, pay taxes and they get offended”, he said, adding that if taxes are not paid and if the people do not demand the shops to register their sales, the combat readiness of the army will decline, the state will be unable to give pensions or restore the buildings in emergency situation.

Speaking about media freedom in Armenia, Pashinyan recorded with satisfaction that the international organizations share the opinion of the Government over the situation with the media. “Yesterday I received the following message from a high ranking international official that they fully share our assessment over the situation with the media, that is 90% of mass media of Armenia is controlled by the former corrupt regime. And the international community highly appreciates the fact that the authorities of Armenia do not make even the minimal efforts to establish some control over those media outlets”, Pashinyan said.

Referring to the criticism, Pashinyan noted that it’s very important for him to hear any kind of criticism, even non-rational ones, because they are useful anyway. “For 3 days I listened to what you said, good or bad. What does not kill us, makes us stronger”, he said.

“Yes, our revolution succeeded only when the citizen believed in himself. And we are proud for being able to inspire that belief, so that he believes himself, and we have a special responsibility now to be able to help the citizen to believe in his powers”, Pashinyan said, underlining that there is no alternative for the people to carry out an economic revolution and they will do that for sure.

“Keep away the rhetorical predictions that the situation will aggravate, because it’s an old way of thinking. There will be no worsening. Things will improve non-stop. But for this to happen each citizen must keep this way of thinking in his mind”, Pashinyan emphasized.

“And yes, today I start my second march. The previous one was a march towards the victory of the political revolution, and this one is a march towards economic revolution. And whoever wants to make a step, let him make his step, whoever wants to pass that path, let him walk with me, because our path is irreversible and we are walking towards a free, happy and powerful Armenia, with the flag of only and only Armenia above our heads. And we are walking, looking at the flag of Armenia, our history and future and we will reach the destination with victory. And wherever there is the necessity, we will lead the people, wherever it’s necessary the people will lead us, and the people will win undoubtedly. The people can carry out the economic revolution and the Government is ready to guide the people to that point”, the PM said.

Pashinyan concluded his speech with the slogan famous from the days of the revolution, “Long live freedom, long live the Republic of Armenia, we and our children that already live and will live in free and happy Armenia. I am thankful”.