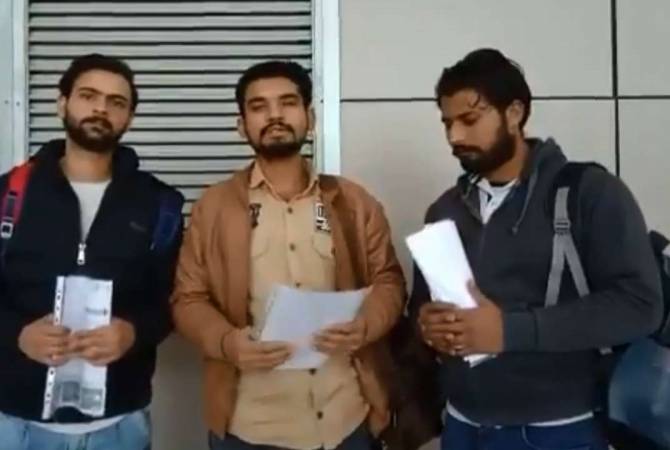 
YEREVAN, FEBRUARY 9, ARMENPRESS. Four Indian citizens, who have been stranded in Armenia after being defrauded by Indian travel agents, presented the details of the incident after returning back to India, DNA India reported.

The four of them were received by Aam Aadmi Party (AAP) parliamentarian Bhagwant Mann at the Delhi airport. The Indian nationals have applied to Mann requesting to bring them back from Armenia.

They were allegedly defrauded by a travel agent and were sent to Armenia on tourist visa after promising work visa.

Earlier the Hindustan Times published an article titled ‘Haven’t eaten in 5 days’, stating that four young Indian nationals from Punjab appeared in difficult situation. A video was released where the Indian nationals say they have not had anything to eat for five days and their landlord demands to leave the house for not paying the rent.

External Affairs Minister of India Sushma Swaraj reacted to the case, stating that the Indian ambassador in Armenia had reached them and was providing all help and assistance.

One of the Indian nationals, Harman Jeet Singh, stated that they came to Armenia in December with a promise of work permit. “Within four days we got to know that there is no work for us. We were told that if we get more people to go to Armenia, we will get Rs 50.000 [nearly 340.000 AMD] as a commission”, he said, adding that a travel agent in Punjab had taken Rs 400.000 [nearly 2.7 million AMD] from each of them and promised jobs in Armenia.

Another victim Shamsher Singh stated: “They lured us and promised jobs with a monthly salary of Rs 40.000 [nearly 275.000 AMD]. But once we came to Armenia, there was no work for us”.

MP Bhagwant Mann said he raised the issue in the parliament several times. “Sushma Swaraj has also asked the state government to frame laws for the travel agents. I am told that the same agent has sent 7 more people to Armenia on January 31”.

Punjab Chief Minister Amarinder Singh had assured Swaraj that appropriate action would be taken against the 6 travel agents accused of sending them to Armenia fraudulently. 2 of the accused have been arrested by the Punjab police in Kapurthala. The remaining suspects have also been found.