Pashinyan presents vision for normalization of relations with Turkey 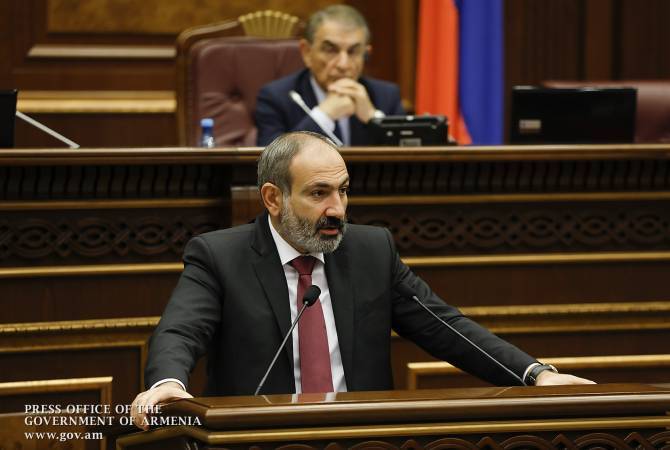 
YEREVAN, NOVEMBER 1, ARMENPRESS. Armenia is ready to normalize relations with Turkey without preconditions, acting PM Nikol Pashinyan said in parliament today in response to a question from MP Ruzanna Arakelyan.

“I recently presented the situation in Armenia during a meeting with a very experienced diplomat when there was a discussion about the situation of our country, and this man is considered to be a very experienced diplomat in the world. I said, look, 2 of our 4 borders are closed – the border with Azerbaijan is closed because of the NK conflict and the border with Turkey, moreover, again because of the NK conflict, because this is absurd when one country is tying  its relations with another country to the relations with a third country. We have two borders, you can think that these borders are open, but they are actually semi-open, because for example the border with Iran might get closed at any moment because of the relations between USA and Iran and the geopolitical situation, the Armenian-Georgian border might get closed, for example due to bad weather conditions and geopolitical conditions. I told him, that factually, for the record we can say that Armenia is an island without sea. I asked him how should Armenia proceed in such conditions. This was the last argument that helped the experienced diplomat to accept the stances and arguments that were brought during the discussion of a very [complicated] foreign policy issue. I can say the same about the Armenia-Turkey relations that has been always said, that Armenia is ready for normalization of relations without preconditions. But let no one anyhow interpret this that with this stance we are [devaluing] the international recognition issue of the 1915 Armenian Genocide, because the Genocide recognition issue is not a matter of Armenian-Turkish relations for us and in our perception. It is a security issue for us and a matter of international security, and it is our contribution to the genocide prevention movement and process. Basically, the border is not closed from our side, the border is closed by the Turkish side because of the NK conflict, and this is a bad policy, because  if anyone has hopes that they can drive the Armenian people through coercion or threats to a given option of settlement of the NK conflict then they are mistaken,” Pashinyan said.

The special session of parliament convened by virtue of law has kicked off for the final round of electing a prime minister.

He has been nominated as a formality by the Yelk and Tsarukyan factions as lawmakers are expected to deliberately vote him down in order to dissolve the parliament – a requirement for calling early elections.

During the first round, the Yelk faction nominated Nikol Pashinyan in a technical maneuver because the Constitution says that a “vote” must take place.

He resigned on October 16 to trigger the process which is required to lead to early elections.

If everthing goes as expected, this will be the first time in the history of the Republic of Armenia when a parliament is being disbanded.