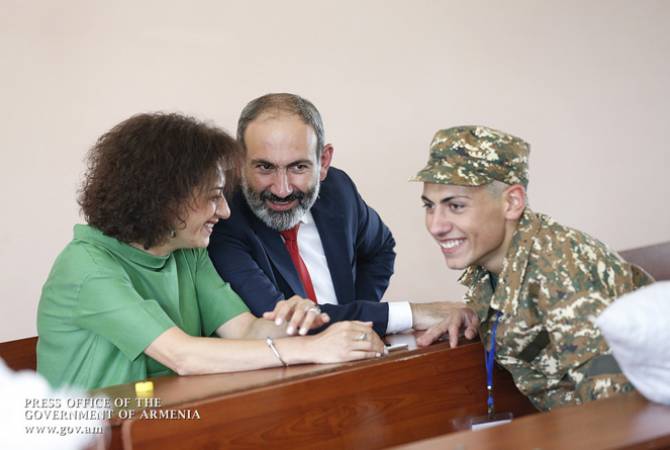 Venediktov asked the PM why he has sent his son to serve in Nagorno Karabakh, and Pashinyan responded by saying that his son has volunteered for military service there.

“Many interpret this as an aggressive gesture, but on the contrary it is a peace-loving step. We all understand that when I send my son to Karabakh I don’t want war to start there. God forbid my son or the sons of my countrymen, or the sons of ordinary Azerbaijanis die. It isn’t reasonable. I don’t want it. I would be glad if Azerbaijani President Ilham Aliyev would also send his son to serve there. If his son would also serve there, I would accept it as a peace-loving step. We would all be convinced that Mr. Aliyev too doesn’t want his son to die,” Pashinyan said.

Asked why he sees a growing threat of war, Pashinyan said that the reason is the military rhetoric of the Azerbaijani authorities. “We speak what we think. At least I have always acted so,” he said.

Pashinyan said that in any situation Armenia will always display an adequate conduct. “The fact that my son is serving in Karabakh means that I don’t want war, but it also means that I won’t spare anything to defend my country and my people. If Azerbaijan launches a war, we will start to fight, although we don’t want to,” he said.

Pashinyan reminded that Russian President Vladimir Putin had introduced him to Azerbaijani President Ilham Aliyev in Moscow during the opening of the FIFA World Cup. Nevertheless, Pashinyan says this introduction was unproductive, because in Brussels at the NATO summit, where Aliyev was also present, the sides didn’t greet one another.

Venediktov said Pashinyan could call Aliyev, to which the Armenian PM jokingly responded: “You know, that’s a very good idea, but I don’t have his number”.

11:29, 05.19.2022
2351 views U.S. recognizes role of population of Nagorno-Karabakh in deciding its future–Ambassador Tracy’s interview to ARMENPRESS