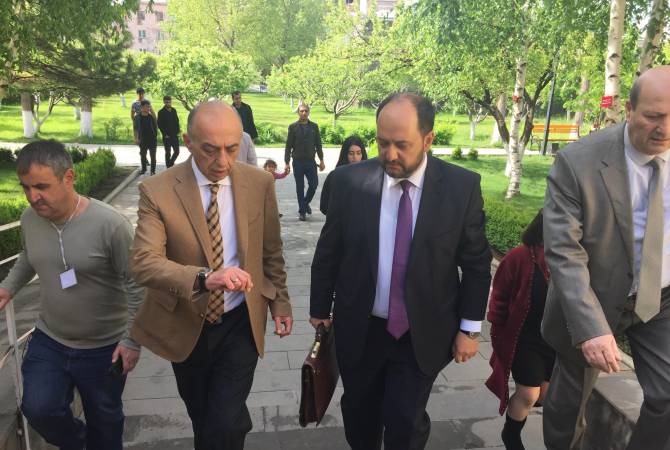 
YEREVAN, MAY 15, ARMENPRESS. Soon the Shirak State University will elect a new rector. Minister of education and science Arayik Harutyunyan visited the university May 15 to resolve the highly publicized student protests involving the rector.

The minister had a meeting with Rector Sahak Minasyan, students and lecturers, and then held a press briefing.

Vice Rector Yervand Serobyan will assume leadership of the university until a new rector is elected, the minister said.

“Mr. Minasyan made a very serious step, this is a compromised  commendable step to de-escalate the existing situation and restoring the academic process. I advise the academic staff not to escalate the situation. This is a solution which will enable to exit the situation. The ministry of education and science will proceed exclusively from the interests of the sector and no one will be granted privileges. I will once again visit Gyumri next week, I will meet with the lecturers and students,” he said.

During the meeting, Sahak Minasyan assured that his resignation until a new rector is elected has nothing to do with the resignation of Felix Tsolakyan, Chairman of Governing Board of the university.

“Let’s not tie everything with this. We have institutional issues, and is these issues didn’t exist everything would have been shifted to the legal sphere,” Sahakyan said, adding that there is a need for forming a new composition of the governing board after Tsolakyan’s resignation. Minasyan didn’t specify any other details.

“I believe that issues in all other universities and educational institutions should be solved like this – through negotiations and compromise. We must take into account that a situation has changed in Armenia, we must take into account that we have new realities in Armenia, but these realities should not take us out of the framework of the law and lawfulness. The ministry of education and science is at the complete disposal of the stakeholder parties. We don’t display partiality, the ministry proceeds from interests of the sector, and we will not give privileges to anyone,” minister Arayik Harutyunyan said.

“The non-academic atmosphere in the university was unacceptable for me, when the issue of one of Armenia’s universities, Shirak University, was being “solved” in conditions of mutual insults”, the minister said.

Earlier on May 14, Armenia’s minister of education and science Arayik Harutyunyan said he will visit the State University of Shirak on May 15 to personally solve the highly publicized problems involving the rector.

“Tomorrow morning I will visit Gyumri, the State University of Shirak. I call on the sides to display calmness, I am sure that we will have a resolution tomorrow. The Gyumri State University can’t remain in such uncertain situation. The state cannot allow this,” the minister said on Facebook.

Students of the university have been protesting against rector Sahak Minasyan, demanding his resignation.

The protests began May 4, when the rector fired vice-rector Anahit Farmanyan.

A month earlier, the rector had also fired two lecturers. The two lecturers, Gagik Hambaryan and Hovhannes Khorikyan, had raised the issue of the rector’s misconduct back in 2017.

Media reports on alleged misconduct involving the rector have been recently forwarded to Gyumri police by the prosecution.