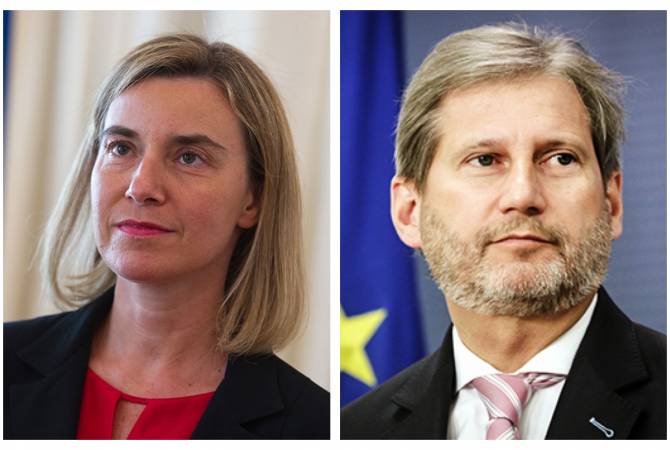 
YEREVAN, MAY 8, ARMENPRESS. High Representative of the European Union for Foreign Affairs and Security Policy/ Vice-President of the Commission Federica Mogherini and Commissioner Johannes Hahn issued a joint statement on the election of Nikol Pashinyan as the Prime Minister of Armenia, the EEAS reported.

“The Armenian Parliament has elected Nikol Pashinyan as the new Prime Minister of Armenia in accordance with the Constitution.

The European Union looks forward to working with him and his government on the implementation of the EU-Armenia Comprehensive and Enhanced Partnership Agreement signed last November, with a view to further consolidating democracy, the rule of law and respect of human rights, and to creating a prosperous and resilient country for the benefit of all citizens of Armenia.

To achieve these important goals, a comprehensive dialogue among all political stakeholders in Armenia, including civil society, remains crucial,” the statement said.

There are 4 factions in the Armenian parliament. The Republican Party (HHK) faction, the ruling party of Armenia, has 58 seats in the 105-seat unicameral parliament of Armenia – known as the National Assembly.  The ARF faction – (Armenian Revolutionary Federation aka Dashnaktsutyun), has 7 seats. The Tsarukyan faction has 31 seats, and the Yelk faction has 9 seats.