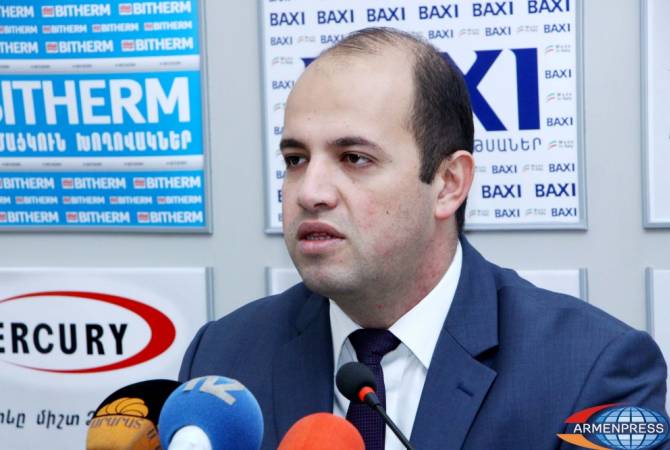 “I think that the position by which the leader of these protests approached to the negotiation table didn’t give place for negotiations. In fact, it was an ultimatum, which the leadership, of course, could not accept. The masses of protests, as well as the presence and participation of political forces do not allow to suppose that the society is really against the current leadership”, he noted.

The political scientist said this was a step by the leadership to calm down the passions and explain Pashinyan and his supporters that it is possible to solve the issues through dialogue.

“I think the logical continuation of this process will be that the public order will be restored in Yerevan within the law”, he said.

PM Serzh Sargsyan and MP Nikol Pashinyan met on April 22 in the Marriott Hotel in Republic Square of Yerevan, the main rally site where every evening demonstrators gather to protest.

The meeting lasted only a few minutes.

The meeting was held in the presence of numerous reporters who were broadcasting live.

“I am happy that you responded to my numerous calls to talk. Although I don’t quite imagine how long we can negotiate in the presence of dozens of reporters, nevertheless I am happy”, the Prime Minister said at the beginning.

MP Nikol Pashinyan responded by saying that there is a misunderstanding and that he has come to discuss the PM’s resignation and peaceful transfer of power, rather than for dialogue.

“That’s not negotiations, that’s not a dialogue. That is simply an ultimatum, blackmailing the state and legitimate authorities. You do not realize the degree of responsibility, you didn’t learn lessons from March 1 [2008]. And if we have to speak in that tone, then I am only left to once again advice you to return to the legal area and overall the limits of reasonable actions. Otherwise the entire responsibility falls on you,” Prime Minister Serzh Sargsyan said.

Pashinyan reacted by saying that the situation in Armenia has changed and the power has transitioned to the people.

“A 7-8% parliamentary faction doesn’t have the right to speak on behalf of the people. And I don’t want to continue this conversation with you anymore. If you do not accept the lawful demand of the state, goodbye,” PM Sargsyan said and walked out on the opposition lawmaker.

Before departing, the Prime Minister addressed reporters, saying: “Dear reporters, you yourselves can make conclusions”.