Russia to view any military threat against Armenia as threat to itself, says senior State Duma MP Konstantin Zatulin 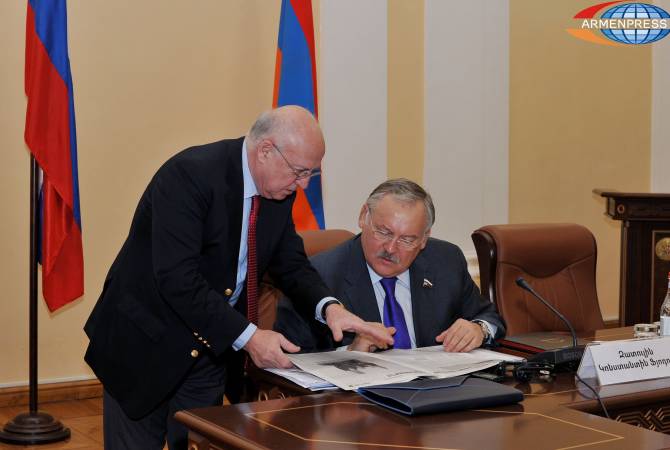 
YEREVAN, MARCH 26, ARMENPRESS. Russia intends to fulfill its allied commitments for Armenia in the security and defense sector, Konstantin Zatulin, First Deputy Chairman of the State Duma Committee for CIS Affairs, Eurasian Integration and Relations with Compatriots of the Russian parliament told a press conference in the Armenian parliament.

“We have ratified the documents on the formation of the Armenian-Russian unified troops and the single air defense system. In the future Russia will also view any military threat against Armenia as a threat against itself [Russia], when it regards commitments in the framework of CSTO”, he said.

He also mentioned that Russia has made conclusions after the clashes of April 2016 which were unleashed by Azerbaijan. “We are sorry that Azerbaijan didn’t find another use of Russian weapons than the violation of the ceasefire in the conflict zone. We’ve made conclusions from this all”, he said.

Zatulin added that Russia has made relevant conclusions regarding the breach in balance of arms in the region and provided Armenia with modern defense measures.

“I am a convinced supporter of the Armenian-Russian historical ties, and the majority of State Duma MPs share this stance”.