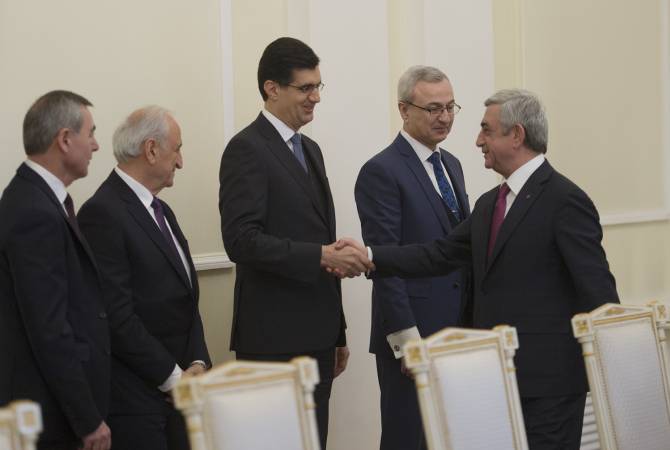 
YEREVAN, JANUARY 17, ARMENPRESS. President of Armenia Serzh Sargsyan on January 17 held a meeting with the organizers of the Award for Global Contribution in the Field of Information Technology, the Presidential Office told Armenpress.

The President first of all thanked the organizers for the work carried out over the past eight years and all those who are interested in the development of the field, and then asked to what extent the award served its goals based on the results of these years, whether there is a need to more publicize the award, what the organizers think about making the award more effective and useful in the future, raising awareness about the country by this award, constantly increasing the youth interest towards the IT field and boosting the IT field as one of the driving forces of the economy.

The meeting participants agreed that they have reached the main goals set by the award: 8 award winners who had a unique contribution to the development of IT worldwide visited Armenia. They have been selected by the award selection committee. Their meetings with Armenian IT specialists and youth caused a great excitement. According to the organizers, one of the goals of the award is raising awareness on Armenia across the world as a center for development of high technologies. And they stated that there is a need to make the efforts more effective on this direction, and works are currently being done for this purpose.

The organizers of the award stated with satisfaction that the award winners left Armenia with great impressions, some of them even expressed a wish to again visit the country, and three of them continued the cooperation and strengthened the ties with Armenia by practical steps. In particular, Chief Development Officer at Cisco Systems Mario Mazzola donated funds to the American University of Armenia, Eugene Kaspersky, CEO ofKaspersky Lab, signed a memorandum of cooperation with the Armenian-Russian Slavonic University on opening a new master’s program and developing the university’s cooperation with the Lab and former Hitachi CEO Tsugio Makimoto published a book titled ‘Armenia As An Innovative country’.

The meeting participants also talked about the recent IT development trends, challenges and potential of the field and presented proposals on future development opportunities.