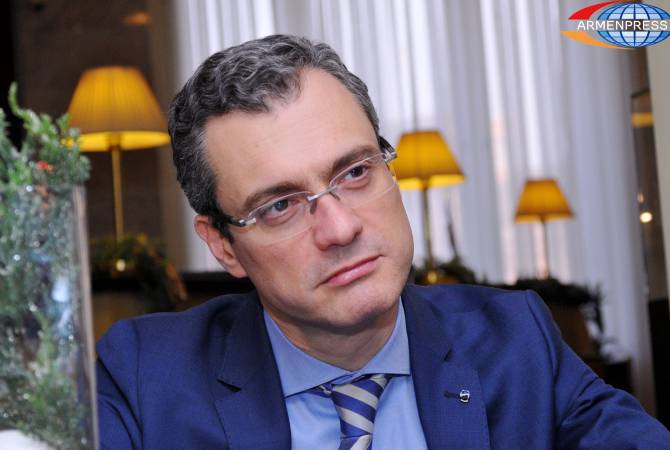 
YEREVAN, DECEMBER 22, ARMENPRESS. Director of the European Friends of Armenia (EuFoA) Diogo Pinto considers the signing of the Armenia-EU Comprehensive and Enhanced Partnership Agreement (CEPA) as one of the major events of the bilateral cooperation in 2017.

He told ARMENPRESS that the organization’s main efforts were directed to the process of signing this agreement.

“This was somehow an expected event, and despite the doubts by some experts, I didn’t doubt that it will be signed. The agreement, of course, raises the Armenia-EU relations to a new level which didn’t exist previously”, he said.

According to the EuFoA Director, Armenia now has a privilege, being as a member of the Eurasian Economic Union (EAEU), it at the same time expands the relations with the EU.

“It can serve as a platform of dialogue for these two Unions where everyone can be in beneficial positions”, he said.

Diogo Pinto stated that the year of 2017 was also unique for the organization by a number of other agenda issues in connection with the Armenia-EU ties, the Artsakh conflict, the constitutional referendum in Artsakh, the parliamentary elections in Armenia.

Talking about the EU-Artsakh cooperation, in particular, the EU’s further engagement in Artsakh, the EuFoA Director said they work with the EU officials on this matter.

“We convince them to move on a direction which we call “engagement without recognition”. The European Union has been engaged in several territories before the clarification of their status: why it should not act so in case of Artsakh? Yes, at present negotiations are underway to clarify the final status of Artsakh. This is agreed within the frames of the OSCE Minsk Group, and the EU just supports these efforts, but this doesn’t mean that the EU should ignore that there is a territory where people live, face the same challenges as the people living in other countries of the world. The EU, is probably, the only structure in the world that has leverages both with Armenia and Azerbaijan and can have positive impact, I repeat again, not on the conflict settlement process, but on the improvement of life of people living there which derives from the interests of everyone. And the only side, which seems doesn’t agree with this is Azerbaijan. I cannot understand this and this should also be unacceptable for the EU”, he said.

The EuFoA Director informed that in 2018 they are going to work on contributing to the ratification process of the EU-Armenia new agreement.

“We should contribute to the acceleration of this process in order to start the next steps, and as a next important step I want to highlight the issue of visa liberalization. The dialogue should launch on this path, and I think both sides have expressed readiness for this, but there are conditions which should be complied with in order to implement it. Of course, the main part of the process depends on Armenia, but I would not like the EU to put aside its obligations since it plays a key role in the context of ongoing reforms in Armenia both from financial and political perspectives”, the EuFoA Director said, adding that 2018 is full of events for Armenia and Artsakh which the organization is going to use to further strengthen the ties with Europe.