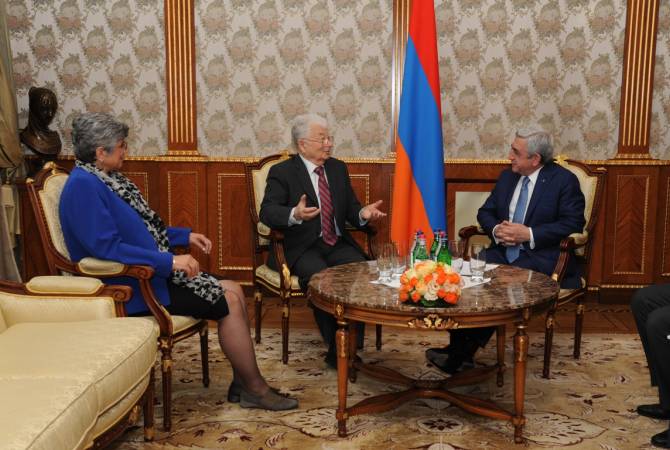 They arrived in Armenia to participate in the World Conference in Yerevan on November 6-8, as well as to discuss issues relating to the strategy of A. I. Alikhanian National Science Laboratory.

In addition to his key role in world science, Yuri Oganessian is the chairman of the international scientific board of the Alikhanian National Science Laboratory appointed by the Armenian Prime Minister. An international commission has been formed by Ogannessian in 2009-2010 which observed and submitted proposals to the government on transforming the Yerevan Physics Institute into a National Scientific Laboratory, and in 2011 he was appointed chairman of the international scientific board of the abovementioned foundation. Up to now Yuri Oganessian provides active consultation and assists the development of that scientific structure.

Ani Aprahamian, who has an experience of management of a number of American and European academic institutions in particular in nuclear physics and isotope production, is also actively involved in the international commission formed by Yuri Oganessian.

Welcoming the renowned scientists, the Armenian President highly appreciated their readiness to assist the science development in Armenia, as well as to contribute to achieving progress in physics and mathematics and educating young scientists.

Serzh Sargsyan highly appreciated the academicians’ consistency in the development of the National Center of Excellence of Oncology and in particular in the establishment of the Center for isotope production and diagnostics in the  A. I. Alikhanian National Science Laboratory, adding that the state will continue consistently keeping in its spotlight and assisting the implementation of these programs.

During the meeting importance was attached to the cooperation between the Foundation for Armenian Science and Technology (FAST) and Ani Aprahamian and Yuri Oganessian, taking into account that Yuri Oganessian is a member of the FAST Board of Trustees.