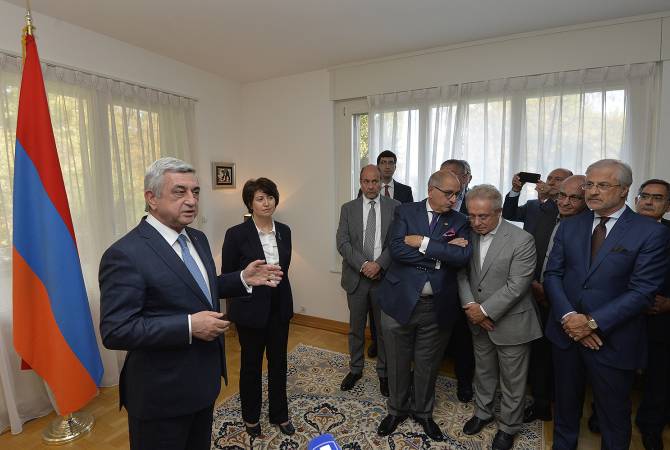 
GENEVA, OCTOBER 16, ARMENPRESS. At the initiative of the OSCE Minsk Group Co-Chairs, the meeting between the Armenian and Azerbaijani Presidents was held at the residence of the Swiss permanent representative in the UN Office and other international organizations in Geneva on October 16, press service of the President’s Office told Armenpress.

The meeting was followed by a private meeting of Presidents Serzh Sargsyan and Ilham Aliyev.

The Co-Chairs expressed their satisfaction with these direct talks, which took place after a long interval. They remain ready to work with the sides on mediating a peacefully negotiated settlement of the Nagorno Karabakh conflict.

The foreign ministers of Armenia and Azerbaijan and the OSCE Minsk Group Co-Chairs issued a joint statement based on the negotiation results.

On October 16, Armenian President Serzh Sargsyan also had a meeting with the Armenian community representatives in the Armenian Embassy in Switzerland. During the meeting the President presented the results of talks with the Azerbaijani President.

God willing, he thinks this way always. He as well understands very well the complexity of the issue, of course, me too, but the problem is such that there will never be an easy solution. But I want you all to be confident on one issue – there is no settlement for us which can somehow undermine Karabakh’s security. The only settlement acceptable for us is that Karabakh be out of Azerbaijan. Never can any Armenian leader accept and implement other solution whatsoever, and for that purpose we will do everything at the same time developing Armenia and strengthening our country economically”, the President said.