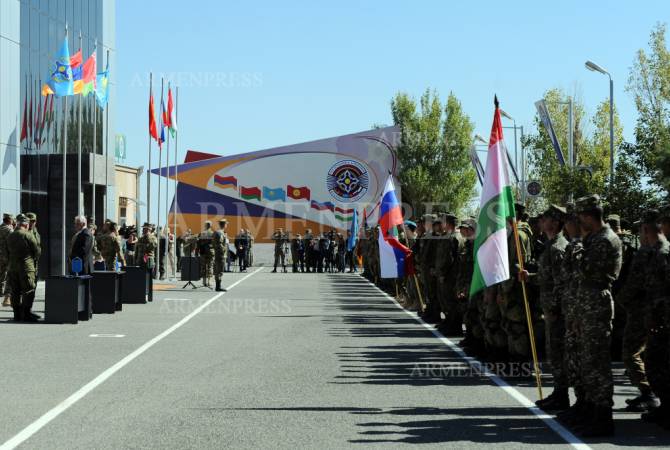 
YEREVAN, OCTOBER 9, ARMENPRESS. The joint military exercises of CSTO rapid response units and the Armenian-Russian unified troops will be held in the upcoming 5 days in Armenia.

The grand opening of the military exercises titled “Partnership 2017” took place October 9 the Baghramyan training facility. The event was attended by CSTO Secretary General Yuri Khachaturov and the Chief of the General Staff of the Armenian Armed Forces Movses Hakobyan.

Hakobyan emphasized that Armenia highly values the CSTO rapid response collective forces as an important tool for de-escalating conflict situations and crisis in international relations – which remain a threat for global security.

“Analysis of the military-political situation in the world, in the CSTO territory, including the Caucasian territory, shows that a great danger of conflicts exists as result of political, ethnic, economic and other contradictions, and the settlement of them is impossible without the CSTO rapid response forces”, Hakobyan said.

CSTO Secretary General Yuri Khachaturov mentioned that this year the CSTO is holding a complete cycle of exercises of the entire collective forces, which are held in two regions – in Caucasus and Central Asia.

“The most important is that the militaries of member states become more combat ready. This is the main task. If each country will have a strong and food army, then the CSTO will have greater reputation”, he said.

Khachaturov mentioned that the CSTO has various directions of activities, which are – the political-diplomatic sector, counter terrorism and extremism, fight against drug trafficking, however the most important direction is certainly military cooperation.