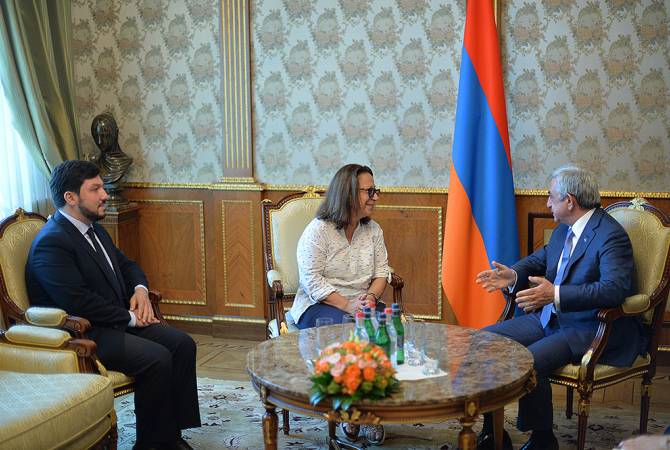 
YEREVAN, JULY 21, ARMENPRESS. President of Armenia Serzh Sargsyan on July 21 hosted Adelina Jouberyan Phon Fürshtenberg, the principal curator for the first “Standard” International Triennial of Contemporary Art, who is the co-founder of the Armenian pavilion and winner of the Golden Lion in Venice's 56th Biennale in 2015, press service of the President’s Office told Armenpress.

In 2015 she has been awarded by President Serzh Sargsyan with 2nd degree Medal for ‘Services to the Fatherland’ for presenting at best the Armenian culture to the international community.

The meeting was also attended by Vardan Karapetyan – Chairman of the “Standard” International Triennial, commissioner for the Armenian pavilion at Venice's 56th Biennale.

President Sargsyan thanked Adelina Jouberyan Phon Fürshtenberg for contribution to present at best the Armenian pavilion at the Venice’s Biennale to the world and attached importance to the organization of the first international triennial in Armenia and her participation in this initiative.

Adelina Jouberyan Phon Fürshtenberg thanked the President for the warm reception and said she brought the Golden Lion award to Armenia with a wish to leave it in the homeland.

The meeting participants remembered President Sargsyan’s remarks on receiving the award at the Biennale who said this prize should be interestingly linked with Armenia. They said by following the President’s words, they initiated the organization of “Standard” Triennial of Contemporary Art in Armenia which is also the unique reflection of this link.

13:12, 05.10.2022
2525 views Armenia’s proposals handed over to Azerbaijan in Brussels include also status, security of Artsakh – Ambassador-at-large