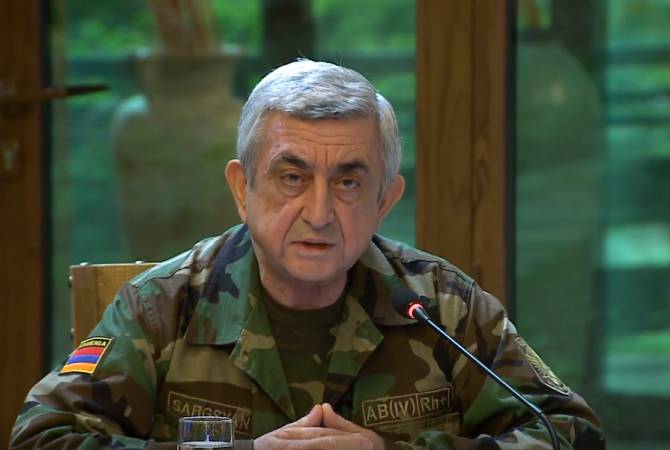 
YEREVAN, JULY 17, ARMENPRESS. Russia’s selling weaponry to Azerbaijan is the most painful side of the Armenian-Russian relations, President Serzh Sargsyan said during an interview to Armenia TV.

“This issue is the most painful side of the Armenian-Russian friendship, the Armenian-Russian military cooperation and generally our relations. I think this issue overshadows many things. But on the other hand, there are circumstances, and perhaps these circumstances aren’t acceptable for us, but acceptable for them. Nothing serious has happened yet. If sometime serious consequences happen, then we can accuse. While is no serious consequences happen we must find it to be Russia’s long-term political activity for stabilizing the situation in the region”, the president said.

Regarding observations on “suspending or decreasing cooperation with Russia”, the president mentioned that these are extremely dangerous words which can create an extremely difficult situation.

“When you say revise, than with whom do you want, in order to revise and improve? With Turkey? Or is everyone waiting with their arms open in NATO? Or should be simply become enemies with everybody, or tell everyone – you are helping Azerbaijan: and it’s just us against the world”, he said.

He reminded that Armenia is proceeding with a balanced foreign policy by having close allies and also cooperating with partners.

President Sargsyan also touched upon the CSTO statements, mentioning that the organization has never made any statement which could’ve contradicted Armenia’s interests.

“The CSTO and its [former]Secretary General Nikolai Bordyuzha personally have always responded to the developments in the Armenian-Azerbaijani border and have done so very strictly. It is obvious that the CSTO must have more passive role while commenting on developments in the line of contact, because, nevertheless, they have a stance, that it is the Nagorno Karabakh military there, it is the official army not the Armenian Army”, the president said.

According to the president, in order to have complete understanding about the CSTO’s actions, one must study the organization’s documents and statements.

“Last year we have the CSTO summit in Yerevan, please have a look at the resolution which the summit passed. The emotional side is very important. I understand it very well, but the essence is what’s important. The CSTO hasn’t done any statement in its essence which can contradict the interests of Armenia”, he said.