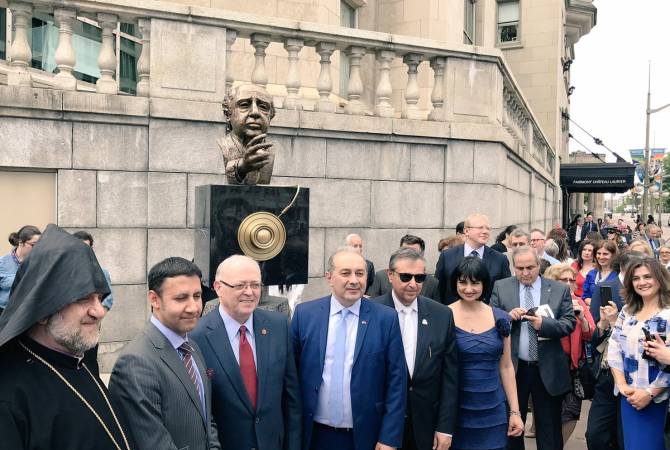 
YEREVAN, JUNE 10, ARMENPRESS. On the occasion of the 25th anniversary of establishing diplomatic ties between Armenia and Canada, and the 150th anniversary of the Canadian Confederation, Armenian-Canadian portrait photographer Yousuf Karsh’s statue was inaugurated on June 9 in Ottawa’s Confederation Park.

The foreign ministry told ARMENPRESS the inauguration was carried out by Armenia’s Ambassador to Canada H.E. Armen Yeganyan, Speaker of Canada’s Senate George Furey and Mkrtich Tarakjean – the renowned Canadian-Armenian sculptor of the statue.

Follwing the inauguration, an official reception was held by the Armenian Embassy in the Château Laurier hotel in downtown Ottawa, attended by Speaker of Canada’s Senate George Furey, Canada’s Ambassador to Armenia H.E. John Kur, Canadian lawmakers, Ambassadors accredited in Canada, official of the foreign ministry, diplomats, journalists and Canadian-Armenians.

Ambassador Yeganyan delivered remarks saying the presence of Yousuf Karsh’ sstatue in downtown Ottawa will always be one of the most beautiful symbols of the Armenian-Canadian friendly relations.

Arif Virani – parliamentary secretary to the Canadian minister of heritage, delivered remarks on behalf of the Canadian government, thanking the Armenian Embassy and community for the large scale work and this unique gift to Canada on the 150th anniversary of Confederation.

Yousuf Karsh, (1908 - 2002) was an Armenian–Canadian portrait photographer. He has been called one of the great portrait photographers of the 20th century by Time magazine and the Metropolitan Museum of Art, with the latter noting the "distinct style in his theatrical lighting.

Karsh's work attracted the attention of varied celebrities and on 30 December 1941 he photographed Winston Churchill, after Churchill gave a speech to Canadian House of Commons in Ottawa.

Yousuf Karsh portrait of Winston Churchill on the cover of Life magazine. It is considered one of the most iconic images of the 20th century.

The image of Churchill brought Karsh international prominence, and is claimed to be the most reproduced photographic portrait in history. In 1967, he was made an Officer of the Order of Canada and in 1990 was promoted to Companion.