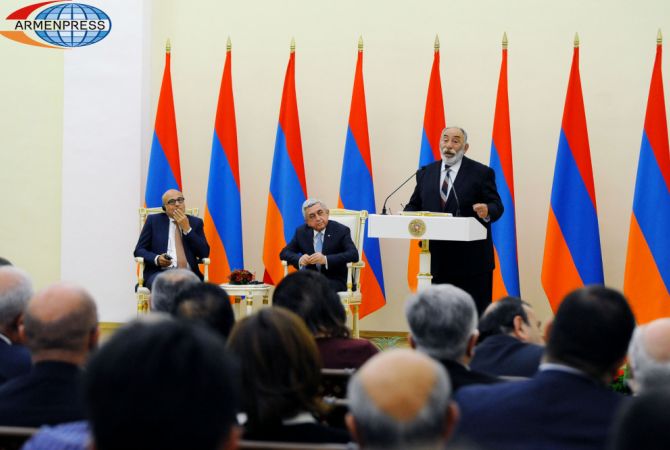 
YEREVAN, MAY 26, ARMENPRESS. Following the resignation of the General Vicar of the Armenian Patriarchate of Istanbul, Archbishop Aram Ateshian, the Armenian community is waiting for the return of Archbishop Garegin Bekchyan. It’s expected he will return to Istanbul to assume his post as the locum tenens, “Armenpress” reports editor of the Armenian section of Istanbul-based “Agos” newspaper Bagrat Estukyan, who received today President’s Award 2016 for regularly raising the issue of Armenian Genocide in “Agos”, told the reporters in Yerevan.

“Archbishop Aram Ateshian has announced about his readiness to give the lead of the Patriarchate to Garegin Bekchyan. On March 15, when the results of the election of the locum tenens were known, we expected that Ateshian would do that, but he stated that the State does not recognize the election of the locum tenens, remaining on the post”, he said.

Bagrat Estukyan does not think the process of the election of the Patriarch will be delayed. It’s expected that Garegin Bekchyan will set up the Initiatory body upon the arrival, following which the candidates must be nominated and the number of polling stations will be determined.

“Generally, each church is considered a polling station. There are over 30 churches in Istanbul. Sepuh Chuljian, Aram Ateshian, Garegin Bekchyan, Sahak Mashalian are the possible candidates. New figures may also emerge”, Bagrat Estukayn said, stating that the Armenian community of Turkey has no feeling of benevolence towards Aram Ateshian. In case of being nominated, he will have little chances to be elected.

Primate of the Armenian Diocese of Germany Archbishop Garegin Bekchyan was elected locum tenens of the Armenian Patriarch of Istanbul on March 15. However, following the promulgation of the results of the elections, Ateshian presented a writ from the governorate of Istanbul, which outlawed the start of the process of the Patriarchal elections. He refused to resign from the post of the Vicar, saying that the Turkish authorities allegedly see only him as the official representative of the Patriarchate.