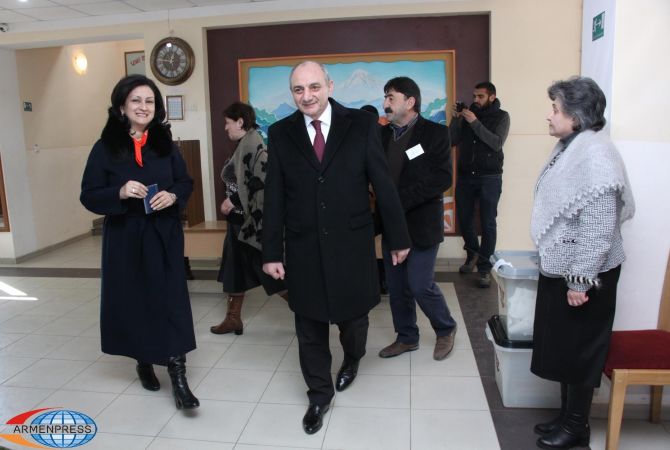 
STEPANAKERT, FEBRUARY 20, ARMENPRESS. Bako Sahakyan, President of the Republic of Nagorno Karabakh, took part in the constitutional referendum of the country in Stepanakert’s 3/3 polling station.

“Today is the beginning of recreating our national liberation movement and statehood. This is a step forward in our state-building work”, Sahakyan told reporters.

In his words, these years are the best proof that Nagorno Karabakh has chosen a right path, and by the constitutional referendum the citizens of Nagorno Karabakh express their commitment to those values, by which they were guided during these years.

“I am convinced, what happened during the years of the national liberation struggle, brought us the chance of being released form captivity, it created favorable conditions for us for being in charge of our destiny on our own, and we are moving by firm steps towards the future of our dreams”, Sahakyan stressed.

He said the purpose of this initiative is clear and those who comment it otherwise are not only wrong but also not honest. “By this step, we pursue the goal of creating additional opportunities for development and prosperity of our country. The Constitutional reforms aren’t for guaranteeing the goals for one person, but are rather designed to build the life of the given country in conditions of legal culture”, he said.