Shahin Mirzoev, who moved to Armenia, is confident that return to Azerbaijan is death for him | ARMENPRESS Armenian News Agency

Shahin Mirzoev, who moved to Armenia, is confident that return to Azerbaijan is death for him 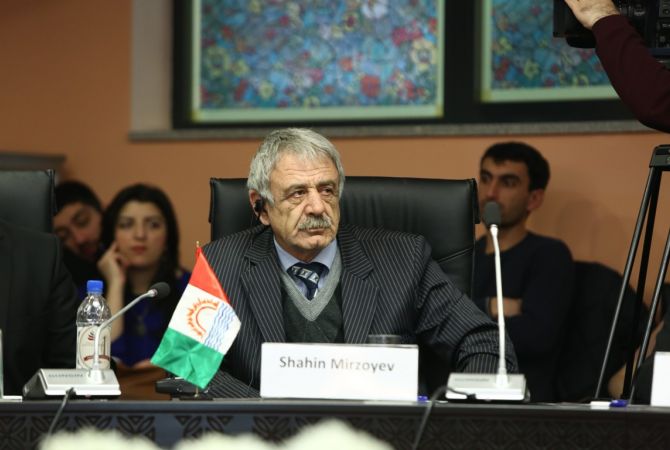 
YEREVAN, FEBRUARY 15, ARMENPRESS. Member of Talysh Cultural Council, participant of Talysh freedom movement, journalist at the “Tolishi Sado” newspaper Shahin Mirzoev, who moved to Armenia with his family and requested for temporary asylum from the Armenian leadership, was taking part in the workshop entitled “The Breakthrough of the blockade of Stepanakert: 25 years later” in Yerevan, reports “Armenpress”.

He delivered a speech at the workshop stating that living in Azerbaijan was risky for him and his family. “I have escaped from the clutches of death in Azerbaijan. Returning again there is a death for me. But I made no mistake in coming to Armenia”, he said.

He said Talyshistan today has the same fate which is now referred to Karabakh. “It can be stated that it is in blockade. Talysh people today in Azerbaijan don’t have an access to any TV or radio, they are unable to raise their issues of concern. Demanding a radio, TV, textbooks on your own language in Azerbaijan means to become a separatist and traitor to the people. Those, who somehow spoke about themselves as being a Talysh, are being jailed or killed. More than 300.000 Talysh people escaped to Russia from Azerbaijan since they are persecuted. More than 2 million Talysh people live in Azerbaijan, how they can be killed, and the world simply follow this from aside?”, he said.

The Armenian MFA on February 11 announced that the Armenian leadership received a request from Shahin Mirzoev for temporary asylum, since as a member of Talysh Cultural Council, Talysh freedom movement, journalist at the “Tolishi Sado” newspaper, he was obliged to flee from Azerbaijan due to the persecutions against ethnic and religious minorities and gross violations of their rights, and to arrive to Armenia with his family. Armenian leadership reacted positively to the request of Shahin Mirzoev.

21:29, 09.24.2021
Viewed 2088 times Today, no Armenian lives or practically could live in the territories under the control of Azerbaijan – Pashinyan