US troops use white phosphorus in Iraq 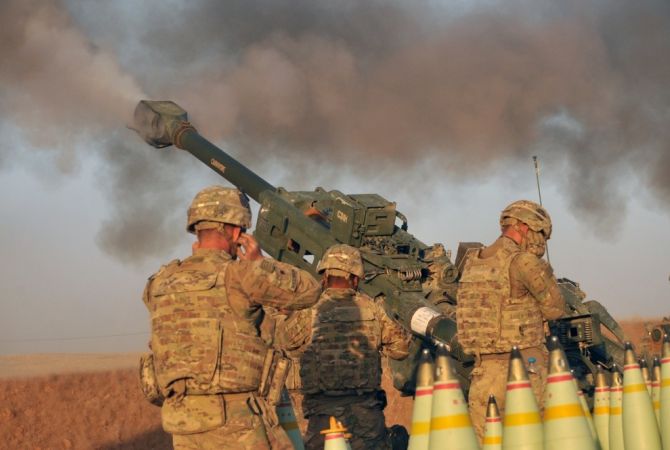 
YEREVAN, SEPTEMBER 24, ARMNPRESS.U.S. forces are using white phosphorus munitions in their fight against the Islamic State based on pictures and videos posted online by the Pentagon, but it is unclear exactly how the controversial armament is being employed, “Armenpress” reports, citing The Washington Post.

White phosphorus shells are intended to make smoke screens or signals for advancing troops. When launched against soldiers and civilians, however, the munition can cause severe burn wounds that can be dangerous for medical personnel treating the injured.

International humanitarian law stipulates that white phosphorus munitions should only be used in areas devoid of civilians. Even using it against enemy combatants has raised concerns, given that the munitions can cause horrific injuries.

Photos posted on a Pentagon-managed public affairs website show a U.S. Army artillery unit in Iraq using white phosphorous munitions, specifically M825A1 155mm rounds. The M825A1 shell can create a smokescreen that lasts about 10 minutes and contains 116 felt wedges impregnated with white phosphorus that jettison and automatically ignite when they come in contact with the air.

Col. Joseph Scrocca, the public affairs director for the U.S.-led coalition, said Wednesday that the rounds are used for “screening and signaling.”

“Coalition forces use these rounds with caution and always in accordance with the Law of Armed Conflict. When M825A1 rounds are employed, they are done so in areas free of civilians and never against enemy forces,” Scrocca said in an email.

“In the foreground of the photo are 155mm white phosphorous rounds, which are used for screening, obscuring, and marking. When U.S. forces use these munitions, as required by the Law of Armed Conflict, they do so in a way that fully considers possible incidental effects on civilians and civilian structures,” Dorrian said in an email. “The U.S. military takes all reasonable precautions to minimize the risk of incidental injury to non-combatants and damage to civilian structures.”

Mark Hiznay, the associate arms director for Human Rights Watch, said he was wary of the U.S.-led coalitions use of white phosphorus munitions and was concerned about its possible use in the upcoming campaign to retake the Islamic State stronghold of Mosul.

“When white phosphorus is used in attacks in areas containing concentrations of civilians and civilian objects, it will indiscriminately start fires over a wide area,” Hiznay said. “U.S. and Iraqi forces should refrain from using white phosphorus in urban areas like Mosul because whatever tactical military advantage is gained at the time of use, it will be far outweighed by the stigma created by horrific burns to civilian victims.”