Zhirayr Sefilian not engaged in negotiations: Police say no need to take Sefilian to the scene | ARMENPRESS Armenian News Agency

Zhirayr Sefilian not engaged in negotiations: Police say no need to take Sefilian to the scene 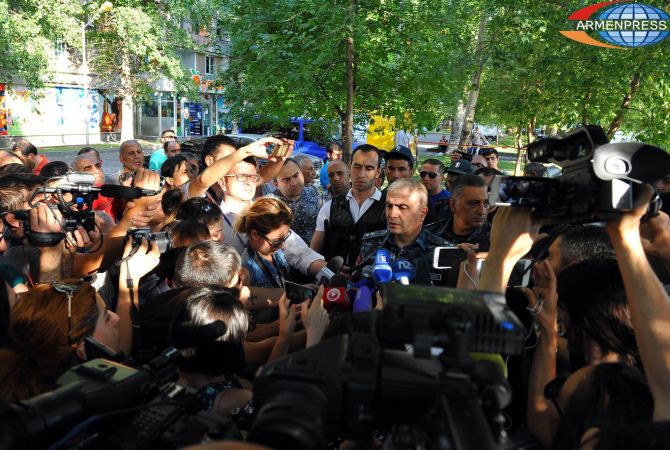 
YEREVAN, JULY 17, ARMENPRESS. The acts of the gunmen in Yerevan have a local nature. They are limited within the area of the patrol service HQ, Deputy Police Chief of Armenia Hunan Poghosyan told the reporters, commenting on the statement issues by the gunmen that they have allegedly took control of airports. “I announce, the activities (of the gunmen) have a local nature, the special units deployed at the scene continue to remain in a state of high combat readiness, but they have no command to storm the building or undertake any other active operations. Negotiations are still underway. They have attacked the area of the regiment and being armed, spread disinformation that allegedly they acquired the weapons from the regiment, but they were armed just from the beginning of the attack”, "Armenpress" reports Poghosyan saying.

He also added the detention of all the citizens at the Freedom Square has been conducted on legal grounds and they will be released according to the standard procedure.

According to the Deputy Police Chief, the health condition of two wounded policemen is in critical situation, the other two are in relatively better health condition. They have received gunshot wounds in different parts of the body. The wounded and the body of the killed policeman have been taken away from the scene.

Hunan Poghosyan informed that the demand of the gunmen remains unchanged: they demand to set free Zhirayr Sefilian. 6 people are kept hostage at the moment. The Deputy Police Chief declined the rumors that Zhirayr Sefilian takes part in the negotiations. There is no need to bring his to the scene at the moment.

“We strongly urge to refrain from provocations, criminal activities and murders. We have always urged not to undertake adventures”, Hunan Poghosyan said.