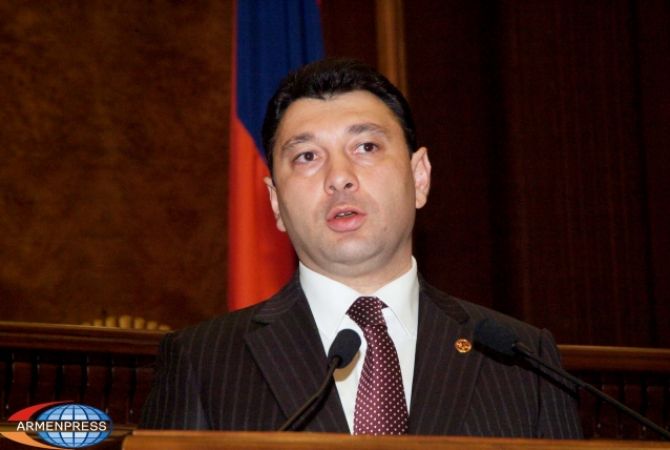 
YEREVAN, JUNE 7, ARMENPRESS. Vice President of the National Assembly of Armenia Eduard Sharmazanov responded to Azerbaijani president’s announcement that allegedly not only Artsakh (Nagorno Karabakh) but also most of the territory of the Republic of Armenia are historically Azerbaijani lands. “Recently Aliyev made an announcement where he, to put mildly, distorting the history, challenged no more, no less ancient philosophers such as Strabo, Polibiosin, Dio Cassius, Plutarch, Ptolemy. He even tries to challenge the trustworthiness of the British encyclopedia and the "World history” of the USSR Academic Edition by stating that not only Artsakh but the territory extending from Syunik to Yerevan is Azerbaijani land”, Sharmazanov said, adding that there would be no necessity to refer to such a ridiculous statement if its author was not a leader of a state.

Sharmazanov quoted ancient writer Strabo as saying that the Aras River divided Armenia and Atropatene from the south.

Vice President of the Armenian parliament quoted a number of other ancient writers evidencing that Armenia existed at least thousands years ago and occupied a territory larger than the Republic of Armenia and Artsakh do it today.

He also referred to the scientific works of A. P. Novoseltsev, who, examining the works of aincient writers, told that not only Artsakh is an Armenian land, but also Utik (currently in Azerbaijan- edit.) and what do the Azerbaijanis do here?

Eduard Sharmazanov urged to turn to Wikipedia. Azerbaijanis – Turkic speaking people. “And where is the motherland of Turkic peoples?” Sharmazanov asked a rhetorical question, “steppes between the Altai Mountains and Central Asia”.

Sharmazanov reminded that a state called Azerbaijan emerged on the map in 1918 as a result of Turkish conquers. He advised the Azerbaijani president to examine one of the oldest maps existing today in Rome when he travels there. “There he will see the borders of the Roman Empire together with historical Armenia and Artsakh, as well as Iran”, Sharmazanov said.

Concluding his speech, Sharmazanov stated that the history does not forgive those who try to distort it, throwing them to a dump.