Armenia and Georgia hail deepening of bilateral relations in all directions 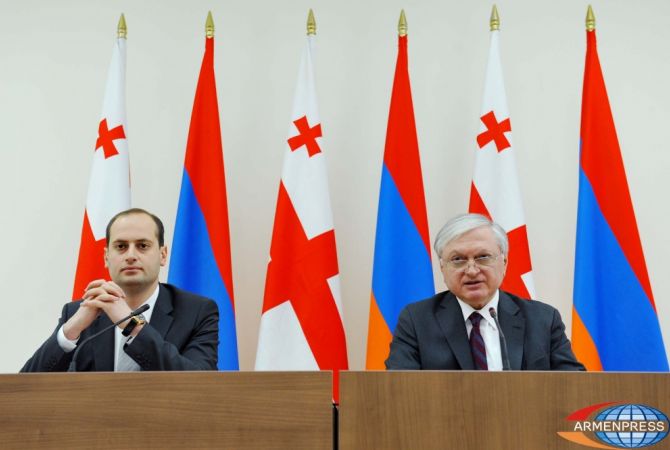 
YEREVAN, MARCH 25, ARMENPRESS. Armenia and Georgia are firm in their aspiration to deepen cooperation in the spheres of mutual interest. “Aremenpress” reports the Foreign Ministers of the two countries mentioned about this in a meeting with reporters on March 25 in Yerevan.

Foreign Minister of Armenia Edward Nalbandian welcomed the presence of the first high level foreign diplomat in the new building of the Foreign Ministry. He noted that the friendly relations between Armenia and Georgia are traditional in nature. “To say that Armenia-Georgia relations are friendly means to say very little. Everything characterizing our peoples are closely tied to each other. And it is not accidental, as we have lived side by side for millennia. This is a neighborhood checked by time and based on mutual respect. Our relations continue to deepen thank to the connecting link such as the Georgian Armenians”, Edward Nalbandian said, adding that meetings of FMs of countries under the same geopolitical conditions and exchange of ideas are of great importance.

Nalbandian informed that during the talks they discussed the implementation process of agreements reached at the meeting of the heads of the two states.

In addition, they reached an agreement to further activate partnership between the foreign ministries of the two countries. “I discussed with my Georgian counterpart issues referring to transport infrastructure, energy, tourism, as well as other economic issues. We continue cooperation over the preservation of Armenian cultural heritage in Georgia”, Edward Nalbandian said.

Foreign Minister of Georgia Mikheil Janelidze expressed gratitude to his Armenian counterpart for the cordial reception, mentioning that this is his first visit to Armenia as a foreign minister. “I have been to Yerevan several times, but this is my first official visit as a foreign minister. I am glad to note that the city gets beautiful day by day. I want to express my heartfelt thanks to Mr. Nalbandian for the invitation and the cordial reception. We always receive such a reception from our Armenian friends”, Mikheil Janelidze said.

Referring to bilateral relations, the Georgian Minister highlighted that the existing issues should be solved by mutual efforts, which is of great importance for both peoples. “Armenian and Georgian are friends, their relations are traditionally friendly and we must spare no efforts to develop those relations in all directions”, he added.

According to the Georgian Minister, despite different choices of integration processes, the two countries wish to serve it for the development of bilateral relations. “We discussed how we can make use of those processes for our cooperation”, Mikheil Janelidze added.

Mikheil Janelidze laid a wreath to the Memorial of the Armenian Genocide victims and laid flowers at the eternal flame, expressing respect with a moment of silence.

Diplomatic relations between Armenia and Georgia were established on July 17, 1992.